A game of Railroad Ink is played over 7 rounds. The goal is to connect as many Exits

to each other as possible by drawing Routes that can create Networks. The more Exits

you connect to the same Network, the more points it will be worth. Bonus points can be earned for your Longest Railway, your Longest Highway, and by drawing on the Central Spaces of your Board.

At the beginning of each round, the Route dice are rolled once. The results of the roll will determine which Routes all players must draw that round. After the roll, all players play simultaneously, drawing the Routes rolled on their own boards.

Take the Route dice and roll them in the middle of the table. Place the dice so they are easily visible to all players.

There are 2 kinds of Route dice.

Note: Stations allow you to connect a Railway Route to a Highway Route. Overpasses allow the two to cross without being connected to each other.

Hint: To more easily keep track of the Routes you have to draw, you can use the dice reference on your board to mark the available Routes, if you so desire.

After the dice roll, all players must draw the Routes on their boards at the same time.

There are a few drawing rules you need to follow:

Important: When drawing Routes, you can freely rotate and/or reverse the pattern you see on the die.

Each player can also use 6 Special Routes, displayed in the top part of the boards, that do not appear on the Route dice. These Routes2 may allow you to connect different Network4 together and/or make bigger Networks.

After you use a Special Route, you must mark it off on your board as a reminder that you can't use it again. Also, you can only use up to 3 Special Routes during the entire game (and remember, only 1 per round).


Once all the players have drawn all of the available Routes, the round ends.

Each player must mark the spaces where they drew Routes this round by writing the number of the current round in the white boxes of each space they drew on. You can never erase the Routes you drew in a previous round.

After that, roll the Route Dice to start the next round.

The game ends after the 7th round. Now it's time to count your score!

Each player counts the points they earned for their connected Exits

, their Longest Railway and Longest Highway, and the Central Spaces they drew on, marking their points on the designated spaces of the Scoring Table on their boards.

Then, each player must check for incomplete Routes. Each end of a Route that does not connect with any other Route or the outer edge of the board counts as an Error. Mark each one of these Errors with this symbol:

You lose 1 point for each Error on your board. Mark these penalty points on the matching space of your Scoring Table.

Note: If you are playing with an Expansion

, mark any additional points on the expansion space of your scoring board.

Finally, add up all the points you earned (subtracting any points from Errors) and write your total score on your Scoring Table. The player with the most points wins! In case of a tie, the winner is the player with the fewest Error marks on their board. If they're still tied, the victory is shared.

is the main way to score points in Railroad Ink. At the end of the game, each set of Exits that are connected to each other via the same Network of Routes is worth a number of points determined by the number of Exits connected together, as shown on the Network Values on your Board.

Note 1: Overpasses only allow you to make two of your Networks cross each other, but they don't create a connection between the two.

Note 2: You can use Stations to connect Railway Routes and Highway Routes to each other.

While the points you get for connecting Exits

may end up being the bulk of your score when you add up points at the end of the game, do not underestimate the importance of the bonus points you can earn from your Longest Highway, Longest Railway, and Central Spaces.

Your Longest Highway is ; the longest unbroken streak of adjacent spaces where you drew Highway Routes that are connected to each other (not counting any loops or branches), such as the route marked in blue to the right. You score 1 point for each space that makes up your single longest Highway branch. Stations do not interrupt your Highway. This example show a Longest Highway of 8 spaces.

Your Longest Railway is determined the same way as the Longest Highway,, only counting Railway Routes instead of Highway Routes, like the one marked in red to the right (worth 5 points).

Your Central Spaces are the 9 spaces in the middle of your board. You score 1 point for each Central Space you drew anything on.

If you have two Longest Routes (with the same number of spaces), only 1 counts towards your final score. 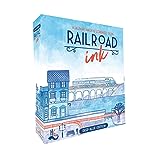