In every culture, there are mythical beings that protect people and help them to solve their problems.

These beings often take the form of winged men whom we call Guardian Angels or Ragami. In this game, each player assumes the role of a Ragami who moves around a city: the board. In this city, there are always people with problems who need help resolving their conflicts.

There are also other Ragami, Saints, and Demons that can either hinder or facilitate the conflict resolution.

The player who has the most Virtue Points (VPs) by end of the game wins. The game ends at the end of the round when one of the following happens:

If there is a tie after all VPs are assigned, the player who resolved the most conflicts wins. If there is still a tie, all tied players share the victory.

The 1st player can now start playing the 1st round.

Round Preparation (use every round except 1st)

Starting with the First player and clockwise, all players perform:

The player chooses the order in which to perform the actions. He may play Action cards before and/or after using an Action die. Players do not have to perform any action, either from a die or cards.

Player 1 takes a turn, then Player 2, etc., and continue until they all pass because they either do not or cannot perform any more actions. Once all players have passed, the round ends.

The Action dice are placed on the Action table during the round preparation. The value of the dice indicates how many times that action can be performed during a round.

On his turn, each player may choose to take one of the 3 actions on the board, or use an Action die to move his Ragami. Once a player has used ANY of the Action dice on his turn, he is only able to take actions using Action cards. After using an Action dice, reduce the value on the dice by 1.

When a die has the value 1 (in red), it means that there is only one action left on that die. When this action is spent, the die is placed on the bottom area of the grid, showing that it cannot be used for the remainder of the round.

Some cards make an exception by allowing certain actions represented on the Action table. Players can also choose not to perform any actions.

A player can ONLY move his Ragami according to certain rules:

The Ragami can move to any on the places shown in yellow.

The yellow Ragami moves two spaces and finishes his movement on a location with a single Demon.

The yellow Ragami wins 1 VP removes the Demon from the board and places it back in the supply.

At the end of the round, if a Ragami is in a city block with Virtue dice, or in adjacent locations to a Virtue die, the value of the Virtue die is increased by one for each Ragami in these locations.

A player can move ANY Saint (any color), according to the following rules:


After moving a Saint, the player MUST either move a Demon or place a new one on the board (choose one option), according to the following rules:

There is no limit to the number of Saints and Demons that can be together in the same place.

He would not be able to place the blue Saint on conflict 23 because his Ragami is there. He then moves the Demon from location 19 and chooses to place it on the same conflict.

Instead of moving the Demon on location 19, the player could have chosen to take a demon from the supply (if there were any) and place it directly on the location 29 conflict.

This action is only for a player to get cards. It is NOT for players to use cards. Please refer to the purple Section "Actions with cards" on page 7 to learn how you can use your cards.

When a player chooses this action, he draws 3 cards and chooses only 1.

The discarded cards are placed on the board, face-up.

A player will only be able to use the chosen card on the next turns.

A player cannot have more than 3 cards in hand. A player with 3 cards in hand can draw cards, but he will have to discard or use one of his cards first. If the draw deck runs out of cards, shuffle the cards in the discard pile (which are face-up) and place them on the board, face-down.

To take this action, the player must have his Ragami on a location where there is a conflict (black die).

To resolve the conflict, the Ragami must pay the same or more Power Points than those of the value of the conflict he wants

to resolve. The conflict is worth the value of the Conflict die + the number of Demons in that location. The player can get the Power Points in 6 different ways. He can use several ways simultaneously:

To resolve this conflict, the green Ragami needs 2 Power Points. He chooses the conflict resolution action and resolves the conflict with his Virtue die, using 2 points.

He moves the black die into the supply, adds 2 VP to his score, moves his green cube forward (number of conflicts re- solved) by 1 and subtracts 2 points from his Virtue die.

Note that the player used 3 Power Points but only got 2 VP. The yellow player gets 1 VP (because his Saint was involved in the conflict).

To resolve this conflict, the green Ragami needs 1 Power Point = Conflict die with value 2 + 1 Demon - 2 points (from the blue Ragami).

There's 1 point missing! He takes the risk and uses the Power die. Result is 1. It is resolved! He moves the black dice into the Supply and adds 2 VP to his score. He moves his green cube (number of resolved conflicts) 1 space forward.

The blue player gets 2 white cubes from the General Supply (because his Ragami was involved in the conflict))..

A player can use their cards WITHOUT using the Action die on the board. There is no limit on the number of cards that may be played during a player's turn but, in order to be played, cards must have been drawn in previous turns.

Players can use cards before and after the action from the Action die. To use the card, follow its instructions (see page 8) and place it face-up on the board in the Discarded and Used cards area.

Red triangle: when resolving a conflict, a player can use only ONE red triangle card.

White cube: this card can be turned in for a white cube instead of using its action.

A player can receive VPs in 6 different ways by:


How to get White Cubes

White cubes are very important for players since they allow to resolve conflicts and to use some Action cards.

There are 3 ways of obtaining the white cubes:

Players may agree not to use this die and card No. 6 to resolve conflicts.

Rules For 2 And 3 Players


For 3 players all 4 Saints start the game. The Saint that does not belong to any player is placed randomly (using a Location chip) on the board during the setup. All other rules apply.

For 2 players all 4 Saints start the game. The 2 Saints that do not belong to any player are placed randomly (using Location chips) on the board during setup. Players may also use a 3rd neutral Ragami.

This Ragami may be used by any player and can only help in conflicts. After randomly assigning the First player, both players place their pieces according to the following order: The 1st player places his Saint and Virtue die. 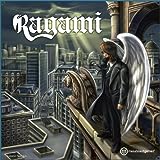