Rack-O is among the most beloved card games. It's been a favorite for players of all ages since the 1950's. This clas- sic version features the original rules, gameplay and look players adore.

To be the first player to replace cards in your rack by drawing cards from the pile whose numbers read in any numerical progression from LOW to HIGH. (See Figure 1).

Cut for the deal. Low card deals first. The dealer shuffles cards and deals out ten to all players.

Important Note: As each card is dealt, each player immediately places it in a slot in his rack.

Figure 2 shows a rack full of cards at the beginning of a round. Note that the cards are in no particular order.

The undealt portion of the cards (the Stockpile) is placed face down in the center of the table. The top card is then laid face up beside it to start the Discard pile. Players take turns beginning to the left of the dealer.

A player must take one card, either the top card from the Stockpile, or the top Discard. If he takes the top Discard, he must ex- change it for one from his rack, which he discards (face-up to the Discard pile).

If he takes the top card from the Stockpile, he may exchange that card for one from his rack, or discard it if he chooses.

When cards are exchanged, the player must place the new card in the slot from which the old card is taken.

A round ends when one player goes Rack-O! In order to go Rack-O a player must have all ten cards in his rack reading from a LOW card in the #5 slot to a HIGH card in the #50 slot, in any combination of increasingly higher cards.

Figure 1 shows one of the many combinations a player could have to go Rack-O and win a round.

The player who goes Rack-O scores 75 points, 5 for each of the ten cards in his rack, and 25 points for going Rack-O.

The other players score 5 points for the cards, in their rack, in LOW to HIGH sequence. Starting with the card in the #5 slot, and ending where the succession of higher cards has been broken. Figure 3 shows a score of 30 points

as card 37 in the #30 slot is followed by card 22 in the #35 slot. No points are scored for the last four cards in the rack even though they are arranged correctly.

The first player to score a total of 500 points or more wins the game.

Four may play as partners, two against two. The scores of the two partners are added together after each round. The pair scoring 500 points first wins the game.

The object of Bonus Rack-O is for a player to score 50 to 400 extra "Bonus" points by including a sequence or runs of 3 to 6 cards in his rack before going Rack-O (see Figure 4).

All the rules of regular Rack-O are used. This game is more of a challenge, as a player must decide to go Rack-O with a score of only 75 or wait to improve his rack for a bonus score.

The bonus is scored only by the player who goes Rack-O, his opponents receiving only 5 points for each of the cards in their racks in LOW to HIGH order.

The bonuses scored for runs are as follows:

Note: If the player who goes Rack-O has two or more runs in his rack, he receives a bonus for only one of them, the longest if there is a difference.

Play is the same with the addition of this rule: A player may not go Rack-O (for a score of 75 points) unless he has a run of at least 3 cards in sequence included in his rack. 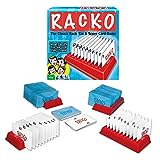