Score the most points by crossing out as many numbers in the four color-rows as possible while avoiding penalty points.

Each player takes a score sheet and something to write with.

Before playing it's important to understand the one basic rule of Qwixx, which is that numbers must be crossed out from left to right in each of the four color-rows.

You do not have to begin with the number farthest to the left, but if you skip any numbers, they cannot be crossed out afterward.

Tip: Put a small horizontal line through the numbers that you skipped, so that you don't cross them out later by accident.

The first player to roll a 6 takes on the role of "active player". The active player rolls all six dice. The following two actions are now carried out in order, always one after the other:

If, after the two actions, the active player doesn't cross out at least one number, he must cross out one of the penalty boxes. Each penalty box is worth -5 points at the end of the game. (The non-active players do not take a penalty if they choose not to cross out a number).

Once all players are ready, the player to the left becomes the new active player and re-rolls all six dice. Then the two actions described on the left are carried out again, one after the other.

If you wish to cross out the number at the extreme right end of a color-row (red 12, yellow 12, green 2, blue 2) you must have first crossed out at least five numbers in that row.

If you cross out the number on the extreme right, then also cross off the lock symbol directly next to it. This indicates that the color-row is now locked for all players and numbers of this color cannot be crossed out in future rounds.

The die of the corresponding color is immediately removed from the game.

Example: Alison crosses out the green 2 and after it, the lock symbol. The green die is removed from the game.

The game ends immediately as soon as either someone has marked a cross in his fourth penalty box or as soon as two dice have been removed from the game (two color-rows have been locked).

It may occur (during the first action) that a third row is locked simultaneously with the second row.

Beneath the four color-rows is a table indicating how many points are awarded for how many crosses within each row (including any locks marked with a cross).

Each crossed out penalty box scores five minus-points. Enter your points for the four color-rows and the minus-points for any penalties in the appropriate fields at the bottom of the scoresheet

The player with the highest total score is the winner. 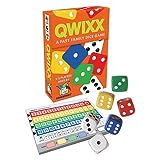