Be the first player to get rid of all your cards by thinking quickly to go up or down numerically or alphabetically!

Shuffle the Direction Cards (+, -, =) and place them in a pile face-down near the center of the playing area.

Shuffle the Qwitch Cards (letter/ number) and place one face-up in the center of the playing area (next to the Direction Card pile) so everyone can reach it. This will be your discard pile.

Deal the remaining Qwitch Cards to the players (face-down), so each person has an equal number of Cards. Place any extras at the bottom of the discard pile.

You may take five cards from your pile to hold in your hand.

The player who dealt the cards turns over the top Direction Card and then yells, "Go!" to start the game play. The most Important thing to remember is that this is a race!

Look at the Qwitch Card on top of the discard pile-it will be a letter/number combination. Now, look at the Direction Card-it will be a + (up), - (down) or = (same). You want to match one of the Cards in your hand to that "equation".

If you have a card that plays, hurry to place on the discard pile and call out the letter/number on the card you just played.

Remember, there are no turns-all players race to play the five cards in their hand. You may play multiple cards in a row, but not multiples at one time.

If two or more players call out a letter/number at the same time, the player who placed the card on the discard pile first gets to stay there, and the other player(s) must take back their card(s).

Play stops when no cards can be played or a player has run out of cards in their hand:

Play continues until one player has played all of their cards from the pile AND hand.

The first player to get rid of all their cards is the winner! Celebrate with your best Qwitch dance!

Qwitch is also a great solo game-play to try and beat your own time!


Alternate play for the younger crowd

If you're playing with a younger child and want to encourage thinking skills without them getting discouraged, play by taking turns (no racing). 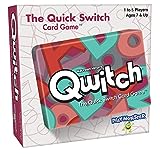 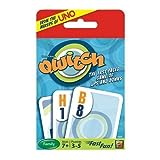