Be the first player to fill in one column of your score sheet with numbers in ascending order.

Give each player a score sheet and pencil. Keeping your sheet secret from opponents, everyone should write down the numbers 10, 20, 30, 40 and 50, each in any box in one of the five columns. (Each column should contain exactly one number).

Tip: When entering starting numbers, make sure to leave enough space for other numbers that will have to be entered during the course of the game.

For example, enter a "10" somewhat further up in a column, while a "50" should go more towards the center.

Place the die in the middle of the playing area. Take a minute to notice that five sides match icons at the top of your score sheet. Also note that the side with the lightning bolt is "wild".

The player whose age is furthest from 100 starts the game and play continues to the left. On your turn, take the die in your hand and call out any number between 1 and 100. Then roll the die.

Once all players (who are able) have entered a number on their sheets, it's the next player's turn to call out a number and roll the die.

Before her roll, Emma called number *9" and then rolled the lightning bolt. Emma can enter the number "9" in her column with the banana, the cup, the donut or the ice cream cone.

Julie can enter it in her column with the cup or the watermelon.

The first player to fill a complete column shouts, "Qwingo!" and wins the game.

In the event of a tie, the player who has the most numbers in the second column or, in the case of a further tie, in the third, fourth, or fifth columns wins the game.

Qwingo can also be great to play on your own. Set up is the same as for the normal game, with one exception: after every roll, make a line in the margin of your sheet to count up the number of turns.

The game ends as soon you have filled a column. Compare your number of turns with the following score chart: 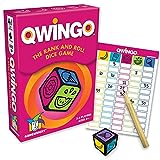