To be the first to reach the line opposite to one's base line.

Each player in turn, chooses to move his pawn or to put up one of his fences. When he has run out of fences, the player must move his pawn.

A draw will determine who starts first.

The pawns are moved one square at a time, horizontally or vertically, forwards or backwards, never diagonally (fig.2).

The pawns must bypass the fences (fig.3). If, while you move, you face your opponent's pawn you can jump over.

Positioning of the fences

The fences must be placed between 2 sets of 2 squares (fig.4).

By placing fences, you force your opponent to move around it and increase the number of moves they need to make. But be careful, you are not allowed to lock up to lock up your opponents pawn, it must always be able to reach it's goal by at least one square (fig.5).

When two pawns face each other on neighboring squares which are not separated by a fence, the player whose turn it is can jump the opponent's pawn (and place himself behind him), thus advancing an extra square (fig.6).

If there is a fence behind the said pawn, the player can place his pawn to the left or the right of the other pawn (fig.8 and 9)

The first player who reaches one of the 9 squares opposite his base line is the winner (fig. 7).

When the game starts, the 4 pawns are placed in the center of each of the sides of the board and each player is given 5 fences.

The rules are identical to those for two players, but it is forbidden to jump more than one pawn (fig.10). 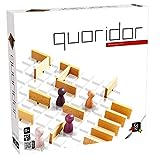