In a game of Quirky Circuits, players will work together to issue commands to a robot friend in order to meet a scenario-specific goal before running out of battery power.

To start a game of Quirky Circuits, complete the following steps in order:

1 Choose a scenario from the scenario book. We recommend first-time players start with the first scenario, dust bunnies. After successfully completing that scenario, we recommend moving to the second scenario the next time you play, then the third scenario, etc.

2 Collect the figure, reference tile and basic (blue) command cards for the robot indicated by the scenario.

3 Place the figure on the Q space, facing the indicated direction.

5 Follow any further setup instructions listed for the scenario and review that scenario's rules.

6 Shuffle the command cards and form a face-down deck.

7 Deal cards to each player, with hand size as determined by the table on the right.

During a game of Quirky Circuits, players cannot reveal their cards to other players.

The backs of the cards will convey some information, like if the card will cause the robot to move or turn, but not which direction it will turn or how far it will move.

Players cannot ever communicate any of the following (verbally or otherwise):

Quirky Circuits takes place over a series of rounds. Each round is divided into 3 phases that must be completed in order:

During the program phase, players collectively play command cards face down into a queue without revealing them. Each player must play at least 1 card and in total the players must play 5 or more cards.

Players may play their cards in any turn order, including a player playing multiple cards in a row, but each card must be played into the queue to the right of the last card played. Cards that have already been played cannot be rearranged.

Practice Mode: As a way to practice the game, or when playing with young children, players may play their cards face up into the queue instead of face down.

Once the players have finished playing cards into the queue, those cards are revealed and resolved in the order they were played (from left to right), causing the robot figure to be maneuvered about.

Halting: If something causes a robot to halt, stop resolving the current card and proceed to the next one.

Once all of the cards in the queue have been resolved, do the following:

If the battery track is not yet on 0, begin a new round starting with the Program phase.

For a greater challenge, try to complete each scenario goal while the battery marker is still in the yellow section of the battery track.

For the true experts, complete each scenario goal while the battery is still in the green.

Dealing Cards: When dealing cards, start with any player with the least cards and go clockwise, skipping players once they have reached a full hand.

Twirl's Momentum: After Twirl executes a Forward 2 command card, place a momentum marker on her reference tile in that direction. After the next command card is executed, move her 1 space in the direction of momentum and remove the marker (unless that card gave her new momentum).

After Twirl collides with an obstacle or barrier, remove any momentum marker placed by the current or previous command card without resolving it.

The first card in the queue moves Twirl forward 2 spaces and places the momentum marker on her reference tile, pointing the direction she moved.

The third card in the queue would have moved Twirl forward 2 spaces, but she immediately hits an obstacle and halts movement. The momentum marker is not placed on her reference tile.

Dropping Tokens Through Barriers: If executing a

command with Rover would cause any part of a token to be dropped outside of the barrier, instead ignore the effect of that

If the target of a Move Token command is being held, move the token toward the space the target is over. 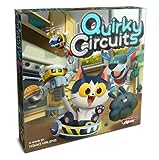