The goal is to obtain the highest number of points by combining the cards in your hand into words.

Before each hand is dealt, the cards are shuffled. In the first hand of the game, 3 cards are dealt one at a time in clockwise rotation to the players.

In each following hand, one additional card is dealt to each player.

Thus, the second hand has four cards; the third hand five cards, etc. In the last hand of the game, each player is dealt 10 cards. After each deal, the remaining cards are placed in the center as a draw pile, and the top card is turned over to start the discard pile.

The player to the dealer's left goes first. Play continues clockwise. Each turn starts with either drawing a card from the draw pile or picking up the top discard. The goal is to use all the cards in your hand (except for the one you will discard to finish your turn) to spell words.

After the first round, players can decide whether they want to spell more, shorter words or fewer, longer words (See SCORING for hints on how to decide). The turn is completed by discarding one card. A player can only lay cards on the table when going out (see GOING OUT) or, in turn, after another player has gone out.

When a player is able to go out, the remaining players each have one last turn. Each remaining player, in turn, will either draw from the deck or pick up the top discard. The player will then lay down his/her words, and discard one card.

He/she will score the number of points on the cards used to build words. Points on the unused cards are counted against the player's total. (Note that the only time you can lay down your cards without using all of them is after someone else has gone out).

A player cannot play on another player's words. The scorekeeper records the points and keeps a running tally.

The deal passes to the player on the dealer's left, the cards are shuffled and the next hand is dealt, continuing until the eighth hand when each player has 10 cards. High score wins.

A player can only go out during his/her turn. After drawing, a player must be able to arrange all the cards in his/her hand into allowable words (see below) with one card remaining.

He/she lays the cards down and discards one card to go out.

If any player does not believe that a word played is a bonafide word, then he/she may challenge the word after it is laid down and before the cards are gathered for the next round.

If the word is in the dictionary and is allowable, then the challenger must subtract the number of points that the word is worth from his/her score.

If the word is not in the dictionary or not allowable, then the player being challenged must subtract the number of points that the word is worth from his/her score. He/she does not get to rearrange the cards into other words.

Be sure to choose your dictionaries before the game starts. No proper nouns, prefixes, suffixes, abbreviated, or hyphenated words can be used. All words must use at least two cards.

Players may use a dictionary when it is not their turn. Don't forget to use The Quiddler SHORT Word Dictionary.

Each card is worth the value shown. In each hand, cards that are combined into allowable words count for the player; unused cards count against the player.

However, no player can score less than zero in any hand. In addition, there are two bonuses.

When two or more players tie for a bonus, no bonus is given.

Note: The bonus for the longest word is given for the word that uses the most letters, not the most cards. When playing with two players, use only one of the bonuses.

The player with the highest score at the end of the last round wins.

The letters shown in the center of the cards were inspired by Celtic manuscripts from 500 - 800 AD such as the Book of Kells, the Book of Durrow, and others. We hope you enjoy the great calligraphy. 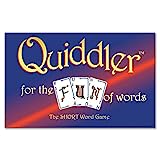