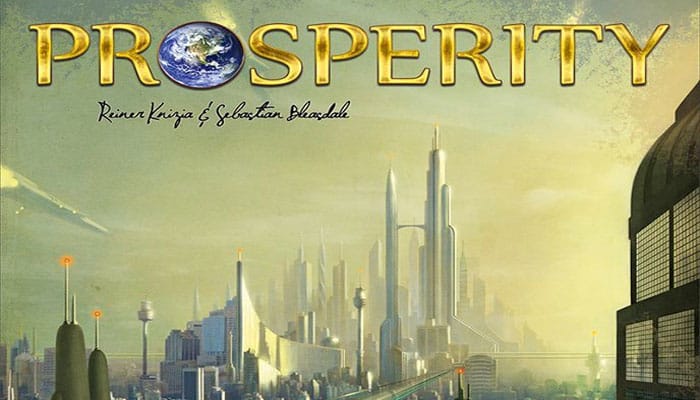 You're the leader of a great nation that is currently expanding. Over the course of the seven decades covered by the game, you will have to invest in infrastructures and industries, provide your country with energy and finance the mercurial forces of research in order to remain competitive.

But prosperity has a price. You owe it to future generations to leave them a healthy world. Pollution lurks, but will you be able to limit it?

Players will score prosperity points on a regular basis throughout the game, and, at the end, the player with the most points will be the winner.

B Area and level of the tile (here, Ecology 6)

Note: the background color of a tile indicates which type it is (in this case, infrastructure).

F Reminder of the final scoring

Notes : At any point during the game, the symbols visible on the individual board of a player correspond to the current development of their country. These will be important at the beginning of each player's turn for scoring.

A Score track (one per player)

The game takes place over a period of time spanning seven decades (1970, 1980... 2030). In total, there will be 36 turns. During a turn, the active player will draw a Technology tile, apply its effects and perform two actions. Then play will proceed to the next player.

The active player draws the Technology tile at the top of the deck and announces the scoring symbol (white-bordered on the tile). Starting with the active player, going clockwise, all players tally the called-out symbol.

Note: when a player removes a pollution disc, the one removed is the one on the highest space of the track.

When a player adds pollution discs, they fill each space starting with the bottom. An unlimited number of discs can be stacked on the last space (triangle-shaped).

Capital: for each Capital symbol on their individual board, the player gets 100€.

Research: for each Research symbol on their individual board, the player moves their marker one square forward on one of the Research tracks. If they have multiple Research symbols, a player can freely decide to split their move between the two tracks.

Important: as long as there is at least one disc on the last space of their Pollution track (triangle- shaped), the player has polluted too much: the player scores no Prosperity points.

The active player then places the drawn tile next to the Research board, depending on the type and level of the tile (as in step 2 of the setup).

Example: Blue is in the situation detailed above.

The active player performs 2 actions. A player can perform two different actions, or the same one twice. The possible actions are:

b. Cleanup: the player removes the highest disc from their Pollution track.

c. Research: the player moves forward one square on one of the Research tracks.

d. Tile purchase: the price of a tile is calculated by comparing the position of the desired tile with that of the player's marker in the Research track linked to that tile:

Example: on their turn, Yellow performs Research as their first action and thus reaches level 3 in Ecology. As their second action, they purchase the Hydrogen vehicles (level 4) and pay 200€ (100€ plus 1 extra Research level).

Once a player has paid for their tile, it is placed on their individual board, either on an empty space or on a space already occupied by another tile. The placement rules are as follows:

Some blue spaces of an individual board can only be occupied if the transport has been previously built. Thus, green squares containing "Unusable space" symbols must be covered by a transport tile of some sort for Infrastructure tiles to be placed later.

After having placed their tile, the player adjusts the energy and ecology totals of their individual board according to the symbols of the new tile (and possibly of those of the covered tile, the effects of which are canceled).

Example: a player covers their Green Belt with Toll roads. Their ecology total goes down by 2 (they lose the positive symbol of the Green belt and add a negative symbol). But now they'll be able to use the spaces leading from the Toll roads to build infrastructures.

Note: At any time, the players can recalculate their energy and ecology totals to check that they haven't made a mistake.

Once a player has performed both of their actions, play proceeds to the next player, going clockwise, and a new turn begins...

The game ends at the end of the turn of the player who has drawn the last Technology tile. A final scoring for each symbol, in the following order, is then made:

Once the final tally is made, the player with the most Prosperity points on the score track is the winner.

In case of a tie, the money still in the players' possession is used for breaking ties.


Note: a player isn't limited to 50 Prosperity points. If a player goes beyond that amount, their marker returns to the start with an added 50 points their score.