Be the first player to collect four Room cards that are either all the same or all different, by quickly matching Cat cards to the corresponding Room cards.

Pounce is played out over a number of rounds. To start a round, all players secretly choose one Cat card from their hands at the same time and place it face down in front of them.

At this point, the holder of the Bruno the Bulldog card may block one of the Room stacks by placing the card on top of a stack of choice.

When all players are ready, they simultaneously shout "Pounce!" and reveal their face down cards. Now everyone races to slap the Room stack that matches their face-up cards.

All players collect their Cat cards back into their hands. Whether or not Bruno the Bulldog was played, the card gets passed to the player on the left.

A new round begins exactly as the previous. Note: You may select the same Cat card or choose a different one every round.

Continue playing rounds until one player wins by collecting either four of the same Room cards or four different Room cards.

In case of a tie, reset all of the cards and play again. For a longer game, play through several times (suggested 3 or 5). First player to win a majority wins the game. 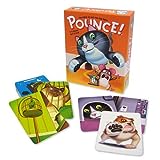