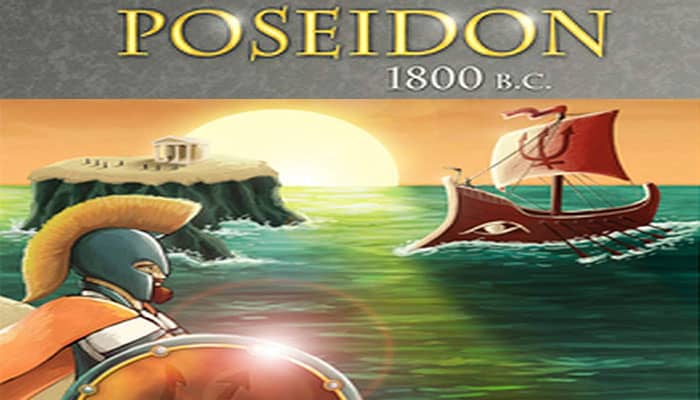 At the end of the game, a player's worth is determined by the value of his merchants and cash on hand. The highest net worth wins.

Place the mapboard on the table. Sort the ships by their number (=reach) with the 2-ships on top and put them on the appropriate space on the board.

Place the 6 Special cards in the middle where all players can see them. Determine player order and pick a starting player at random.

Each player receives starting capital depending on the number of players:

The game consists of alternating Merchant and Exploration Rounds, preceded by a special Poseidon Round. The sequence of these rounds is given on the left side of the map.

The player to the right of the Starting player begins in the PR, then play continues counter-clockwise. Each player chooses one of the Special cards and pays its printed value to the bank. They can not pass.

The Special cards give the noted income to their owners at the beginning of each Exploration Round, varying with the phase of the game. In addition, they have the listed special powers.

At the beginning of each Exploration round, the owner of each card decides if he wants to collect income from the card or use its ability.

With the exception of P4 (Poseidon), all Special cards are void and discarded after their special powers haven been used.

The owner of this Special card gets the white Delian League marker. Once during the game, he can put that marker at any time under a trading post of any nation he's the king of. This doubles the value of that trading post for that nation permanently. The marker can't be used for the New World areas, and cannot be moved once placed.

With each of those three special cards, a player can give a nation he's the king of a special "high culture" trading post without moving the discovery ship there. (A nation may have no more than one high culture).

This happens at the beginning of an Exploration Round, so the owner can choose to either get the income or give the nation a new source of income. The three hexes are reserved for the high culture trading posts; no other trading posts or New Homes can be established there.

Doubles the range of the fleet of any one nation once each in phases 2, 3 and 4. If the phase is over and Poseidon has not been used, that phase's usage is void. If the action is used, the card is flipped over until the start of a new phase.

This Special card can be traded for any merchant from the merchants pool at the beginning of a Exploration Round. This happens instead of getting income.

All special cards other than Poseidon are void as soon as they use their special ability.

Following the Poseidon round, the first MR starts. It begins with the starting player and continues clockwise until all players have passed in order.

On a player's turn, that player can:

After all players have passed consecutively, the Starting player card moves one player in clockwise order. After MR 2, 3, 4 and 5, the top ship from the ship deck is removed from the game.

Before any player can take over merchants of a nation, that nation has to be founded by someone buying the King's card.

When a player is founding a new nation, that player performs the following actions:

The remaining disks stay on that nation's charter and can be used later as either additional merchants or trading posts.

The player founding the nation can't sell those merchants nor buy additional merchants of that nation during that MR.

Example: Jakob founds Ambrakia, sets the prestige to 70 1 and places 7 of the 22 black potentials into the Merchant pool 2. Ambrakia gets 7 x 70=490 drachma. He now buys 4 of those merchants for 280 drachma,placing 3 on the Kings card 3 and 1 next to it 4. The other 3 merchants can now be bought by any other player.


Later, at the beginning of phases 2 and 3 (when the first 4-ship and 6-ship are bought, respectively), the player who is king can decide to place additional disks into the Merchant pool as new Merchants for that nation.

The nation gets an amount of money corresponding to the number of new merchants times the actual prestige. This money is placed in the nation's coffers.

Overview of the nations:


Taking over a merchant license

When it's a player's turn during an MR, that player can buy exactly 1 Merchant from the Merchant pool. Merchants are available for their nation's actual prestige value. The player pays the money to the bank. Each player may hold a maximum number of Merchants (including those on King's cards):

When it's a player's turn during an MR, he can put back any number ofMerchants into the Merchant pool and get the current prestige paid out by the bank.

The 3 Merchants on a King's card can never be given up, unless the King card itself is transferred to another player.

Change of Prestige during a Merchant Round

At the end of each MR, for each nation in operating order, check to see if any player holds more merchants than the current king. If so, starting with the player with the most merchants, give each such player the opportunity to take over the King's card. (Ties are broken in clockwise order from the current King).

The player may choose to:

Course of action during an ER:

Each nation has one discovery ship token. This ship moves on the map to build new trading posts. The range of that ship always equals the actual phase. Therefore, at the start of the game, it can move 1 hex per Exploration Round.

Nations use their potentials as trading posts. In the home port, no trading post is established.

The Trading fleet always starts from its home port, but it is possible to establish a New Home in another hex, after which the fleet may choose, each turn, to start from either the original or new home.

The New Home marker may be placed in a circle on any unoccupied hex visited by the nation's Discovery Ship this turn. Once a New Home token has been placed on a hex, no other (New Home or Trading Post) tokens may be placed there.

Like the fleet's original home, the value of the hex with the New Home is zero. A New Home can neither be placed on one of the New World locations (Kyrene and Kypros) nor on one of the High cultures (P1-P3).

Each nation has one or more ships - their trading fleet. This fleet visits several of that nation's trading posts. The range of a fleet is always the sum of the ships' value.

The range is the number of hexes a fleet can move. The fleet always starts either from the home port or from the New Home. The fleet may not cross the dark lines on the map (for example, the border between Ainos and Perinthos), but must sail around them.

The fleet may sail past hexes where it does not have a trading post, whether the hex contains no circles, empty circles, or circles filled by other nations' trading posts.

The fleet produces revenue by visiting temples and its nation's trading posts. Some of the temples ask for a donation of 10, 20 or 40 drachma from the nation's coffers to produce revenue, others are free.

The King decides if he's sending out his fleet or not.


Change of Prestige in Exploration Rounds

If the fleet went out and revenue was paid to that nation's merchants, the prestige marker moves one space to the right.

In all other cases, it stays in its current location.

Stacking rule: If a prestige marker is moved onto a space that already holds one or more markers, the arriving marker is put on the bottom of the stack.

Ships always sail as a fleet, the value of the ships is added. Each nation always has to have at least one ship, the maximum number of ships allowed is 3. The purchase of the first 4-ship and the first 6-ship forces the change of phases.


Purchase of the First 4-ship

Purchase of the First 6-ship

Purchase of the First E-ship

Example for the first 2 exploration rounds for Athenai:

2 A red potential is placed on Andros as a trading post. There's no income, as Athenai has no ships.

3 Athenai buys two 2-ships and pays 200 drachma from her coffers.

5 A red potential is placed on Paros as a trading post.


Athenai has two 2-ships, therefore afleet range of 4. Thefleet can move 4 hexes and visit all own trading posts on the way as well as the neutral temples. The Ios temple has a revenue of 8 if the nation pays 40 drachma from its coffers.

Athenai pays 40 drachma and therefore has a total revenue of 14: Andros 3 + Paros 3 + Ios 8 The fourth hex the fleet could move to is void as there's no other own trading post or temple within range.

For each Athenai merchant a player holds, that player gets 14 drachma.


Forced Purchase of a Trading Ship

Each nation must have at least 1 ship at the end of its turn in a Exploration Round. If a nation has no ship (in its first ER; or because all ships went obsolete; or another nation bought its last ship), it must buy one.

If the nation does not have enough money to buy a ship, the King must transform potentials into new merchants by putting them into the Merchant Pool.

The nation's prestige value drops one space to the left, and the nation receives that new value times the number of merchants created. (Only enough new merchants to raise enough money to buy the next ship available may be created).

If the nation has used up all of its potentials and still does not have enough money to buy a ship, the King must pay the remaining amount from his own treasure, possibly selling merchants (of that nation or other nations) to raise the needed funds. (As always, if a player sells merchants of a nation he is King of, that nation's prestige value drops one space to the left).

Money raised in this manner cannot be used to buy ships from another nation, only from the bank. If the King cannot raise enough money to buy a ship, because the only merchants he has left are those on King's cards, he is bankrupt and forfeits all of his cash to the bank.

The current ER is completed and then the game ends early. (Thus, it is possible for more than one player to go bankrupt).

The game ends after the eleventh Exploration Round. Players calculate their total wealth by adding their personal money to the prestige value of their merchants.

Money on the nations' charters has no value at game end.

Only 6 nations and the Eastern part of the map are used. Remove one each of 3-ship, 5-ship, 7-ship from the game.