Point Salad is a card-drafting and tableau-building game for 2-6 players. Players take turns building a salad of veggies and collecting point cards in order to score the most points for the ingredients in their salad!

Double-sided cards feature 18 each of 6 different veggies with 108 unique scoring conditions on their point card backs.

Note: Since Point Salad is so quick-playing, you may decide to play multiple rounds! You may keep track of scores over multiple rounds and declare a winner at the end.

For 2 players, we suggest splitting the deck into 3 equal rounds of 36 cards each (see above), or for 3 players, 2 equal rounds of 54 cards each. This will allow you to use the full deck through multiple rounds and spend less time sorting the cards!

On your turn you draft one or more cards. You may draft either

After you select your card(s), add them to a face-up tableau in front of yourself, then your turn is complete.

Optional free action: Once per turn, you may choose to flip over any one of your point cards (either drafted this turn, or on a previous turn) and turn it into a veggie card (but you cannot flip a veggie card into a point card).

Note: The veggie type is indicated in the corners of the card.

Once you have drafted your card(s), refill the veggie market by drawing cards from corresponding draw piles in each column, filling any empty slots.

Flip the cards over from the point side to the veggie side as they enter the market. If one of the draw piles of point cards runs out, split the largest pile roughly in half, and move the bottom half to replace the empty pile (ensuring the point card on top of the largest pile does not move).

Once the market refill has been completed, play continues with the next player to the left.

The game ends when all cards from both the point card piles and veggie market have been drafted. The player with the most points is the winner.

Players tabulate their victory points by counting how many points each of their own point cards are worth and adding these scores together to obtain their final score.

If two players are tied in total victory points, then the player who played later in the turn order is the winner. When tabulating a point card, a player's full tableau of veggie cards are considered

If two players are tied for a scoring condition on a card (e.g., most onions), then the player with the point card scores the victory points. 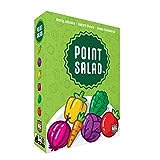