Pokeno combines the thrill of poker with the anticipation of Bingo.

Each player, except the dealer, is given a board and some counters. if there are no more players than boards, the dealer may also play if desired.

The dealer or "caller" is furnished with an ordinary deck of 52 playing cards, shuffles them and turns over the top one, calling it out. For example, "queen of spades".

Each player who has the queen of spades on his board covers it with a counter. The dealer continues turning over the cards in succession, and the players continue covering on their boards, until some one wins by having a complete row of five covered, - either horizontally or vertically - when he or she calls "out".

The player who wins then becomes the next dealer.

One way of playing PO-KE-NO is for the winner to receive all counters lying on the other boards.

Other methods are given below.

The winner receives a reward, greater or lesser, according to the poker value of the line or "hand".


Note that the boards are ingeniously arranged so that each line vertically and horizontally represents every different poker hand, ranging from the "straight flush" to "a pair".

Although the values are balanced, no two boards are alike.

Same as the preceding except that the dealer continues turning over the playing cards until every one has five in a row, in which case the player with the line covered which has the greater poker value, is the winner.

PO-KE-NO may be played like "Twenty-One" or "Black Jack", where the dealer covers his own board and plays against each individual player. The dealer turns over playing cards until he has five in a row covered on his own board.

The other players who have not five in a row covered by this time or whose row has a lesser value than the dealer, lose to the dealer. He in turn loses to those who have rows covered of greater poker value. It may be arranged that the larger hands will entitle those holding them to a greater proportionate reward.

PO-KE-NO may also be played on a principle similar to Roulette. Each player except the dealer or "banker" is given a board and may lay a wager on any figure thereon which automatically covers two rows, one vertical and one horizontal.

The banker turns over playing cards and the players cover only those called which happen to be in the two rows on which he wagers.

If one of these two rows is not covered by any player so that no one is "out" on them by the time twenty-five cards are turned over, the banker gets the wagers. If player is "out" on either his horizontal or vertical row, he gets a certain standard reward arranged in proportion as in Roulette. 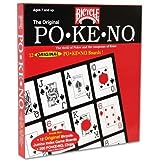 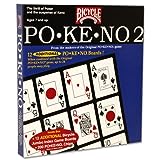 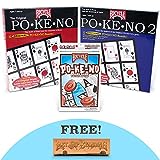