A world is taking shape in the palm of your hands. Spread your mountain ranges and your deserts, expand your forests, oceans and glaciers.

Strategically position your continents to form hospitable environments for animal life to develop and try to create the most populated Planet!

Throughout the 12 turns that make up the game, strategically position your continent tiles on your Planet's core to form hospitable environments for animal life to flourish.

Win points by completing "Natural Habitat" objectives and by populating your Planet with the most animals possible.

The winner is the player with the highest points total at the end of the game.

Every turn is made up of two parts:

Example: in a game with 4 players, after the first turn, the one remaining tile is positioned at the end of the row of piles of Continent tiles.

Note: At any time during the game, players can take a look at other players' planets.

Example: you would need 11, 12 or 13 Areas of the Glacier Natural Habitat at the end of the game, in order to score 2 points 1.

2. The origin of life

From the third turn on wards, life starts to emerge on the Planets. All players check if their Planet meets the conditions required to host the Animal cards which can be won with each turn.

What is an Area and what is a Region

3 types of requirements for welcoming animals onto a Planet exist:

If there is a draw, the animal is not given to any player and the card is placed at the bottom of the column for the next turn. It is then possible for players to win it later.

If one or several animals don't find a Planet which is habitable for them during the last turn, apply the following rule:

In the event of there still being a draw, no one wins the card and it goes back in the box.

Example: Matthew 1 and Celine 2 are competing to house the fox on their Planet. On the last turn, they both had a forest spanning 9 Areas and touching a glacier. However, Celine's Planet also contains a second 5-Areas forest which touches a glacier 3 , whereas Matthew doesn't have another. In this case, Celine wins the card.

The player who possesses the most habitable Planet for the animal takes the card and keeps it in front of them.

Note: At the end of the game, the animal cards bring 1 or 2 points to the player who has kept them.

The player who had the First Player token gives it to the player on their left.

The turn ends and a new turn begins.

The game ends after the 12th turn (when the player's Planets are fully covered) and after the last Animal cards have been won.


Note: Players score points with animals regardless if they have met the minimum "Areas" requirement on their Natural Habitat objective card.

In case of a draw, players with the most Animals cards win the game. If there is still a tie, each player remaining in the tie wins.

For your first game, or for younger players, simply play without the "Natural Habitat" objective cards. Each animal earns 1 point.

During set up, position the 20 Animal cards in 2 lines of 10 cards in the center of the table. One of the lines is placed face down and the other face up. 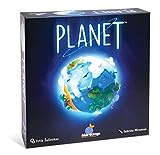