Shuffle all 91 photo cards and place 16 of them as seen on the right (4 by 4 cards) in the middle of the table. Mark the lines with the letter tokens and the columns with the number tokens. The photo cards stay in place for the entire game.

Put all coordinates tokens into the cloth bag and shuffle them.

Each player then takes one arbitrary set of materials. Place the remaining sets (only in games with 3 or 4 players) to the right of the oldest player.

Each player also takes 1 scoring sheet and a pen or pencil (not included). Then write the names of each other player into the first line of the scoring sheet.

Sequence of a round:

In a game with 3 or 4 players, there are 2 or 1 set(s) of materials respectively placed to the right of the oldest player. These are also moved by one position to the left.

The game ends after 5 rounds. Each player then has pictured one photo with each set of materials once.

Tally up the scores of each round. Whoever has scored the most points wins the game. In case of a tie, all players participating in the tie win together.

Each coordinates-token is included three times, so it is possible that the same picture card has to be pictured with the same set of materials. To avoid this, players may agree to one of the following variants: 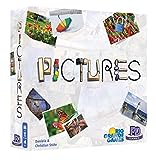