Each round, combine two Poison cards to create a difficult decision. Pick the same Poison card as the majority of other players to score. The first player to 15 points wins the game.

All players should start with the following nine cards.

The player with the most recent birthday is the first Judge. The other players are the Picking players.

The Judge chooses a Poison card from their hand and places it face up on the A spot on the game mat. This is card A for the rest of the round.

The Picking players choose a Poison card from their hand and submit it face down to the Judge.

Hint: players should choose a Poison card that will create the most difficult decision when compared to card A.

The Judge collects the Picking players' Poison cards and reads them aloud. The Judge selects one of these cards and places it face up on the game mat in the B spot.

This is card B for the rest of the round. The player who submitted card B gets one point. The other submitted cards are discarded.

The Picking players can ask the Judge clarifying questions about the two Poison cards (card A and card B). The Judge can elaborate on each scenario however they like.

Hint: The Judge should try to balance the unpleasantness of the two poisons to make the choice as difficult as possible for the Picking players.

The Picking players now "pick their poison", indicating which poison they prefer (card A or card B) by playing their corresponding Pick card face down.

Picking players can play their Double Down card alongside their Pick card for double points.

Players reveal the Poison card they choose by flipping over their Pick card. Points are tallied on the score sheet by the Judge.

Discard card A and card B. Picking players retrieve their Pick card (and Double Down card, if they played it and didn't lose it).

All players draw Poison cards from the deck until they have six in their hand. The player to the left of the Judge becomes the next Judge.

Each round is scored depending on how many players picked each Poison card.

If all Picking players choose the same Poison card they each get one point and the Judge loses two points. Hint: don't create such an easy "would you rather..".scenario next time, Judge.

When some players pick Card A and others pick Card B the Picking players who agree with the majority get one point. All other players get nothing.

If half of the players pick Card A and half pick Card B, the Judge gets three points and the Picking players get nothing. Hint: When playing with an odd number of Picking players, see house rules

The first player to reach 15 points wins the game.

Mix in these rules to make Pick Your Poison your own.

When playing with an odd number of Picking players the Judge picks a Poison card alongside the other players. The Judge only receives points if the round ends in a tie.

In a split decision, the Judge gets one point for each player that didn't vote with the majority.

When all but one Picking player chooses the same poison, the odd player out has to take a shot

Take a drink after every round that you fail to score a point. 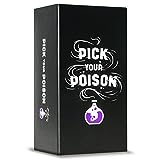 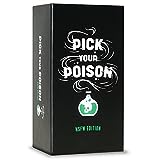