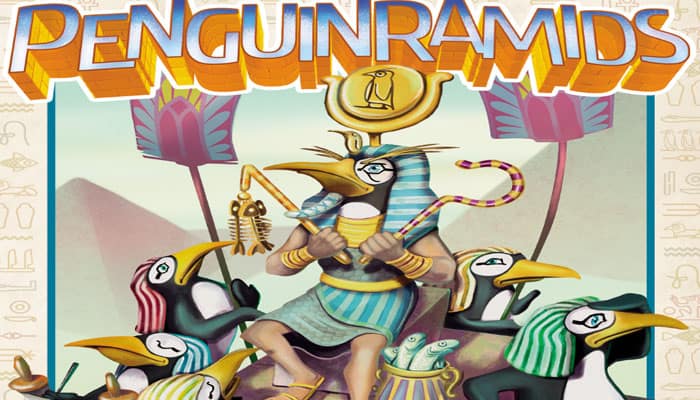 Like every year, the dynasties of the penguins of Giza challenge each other by building the most impressive penguin pyramid in Egypt. In order to do so, they have to pick the most suitable penguins to build their structure while eyeing the goals set by the pharaohs.

They must balance the priority of choosing the best penguins with the strategic impact of the actions they can perform. You don't need dexterity or brute force: the smartest architect will prevail!

During each round, all players play a card from their hand which determines the turn order for choosing a penguin from those available: the lower the number played, the earlier you choose.

Once penguins are assigned, each player places the penguin they chose in front of them by following certain conditions, building a pyramid as the game progresses and trying to put heavy penguins in each level.

When placing penguins, you should also keep an eye on the Goal cards, as they provide additional ways to score points. At the end of the game, points are assigned for penguins in each pyramid and for matching Goal cards: the player with the highest score is crowned the new penguin pharaoh!

At the start of each round, reveal a number of Penguin cards from the deck equal to the number of players (you already did this for the first round).

Each player then secretly selects one Action card from their hand and puts it face down on the table: when everyone is ready, the cards are revealed at the same time.

Players then take their turns in the order established by the number on their Action cards: the lowest number goes first, then the second lowest, etc. Ties are broken by starting with the player who has the Chief Penguin (if they are not involved, the closest involved player in clockwise order) and proceeding clockwise.

Once an Action card has been played, keep it face down in front of you to one side: you cannot use it again until you draw it (by playing Action card #4, see below).

During your turn, in any order:


Placing a Penguin in Your Pyramid

A pyramid is built starting with the base, and must be built in the following 4-level configuration:

Each Penguin card must be placed in the pyramid following these rules:


Attention: You must always choose a penguin that you can place in your pyramid, if possible.

Only in the case that you can't (because no legal penguins are available) are you allowed to take any penguin and place it in your pyramid by flipping it to the grey side.

Example: Luke must choose between a 3- and a 0-weight penguin. He can't place the 3 in his pyramid, but he can place the 0, so he must take it.

The Action card you play determines which action you are allowed to perform:

The 10 Goal cards, 3 of which are revealed at the start of the game, show special conditions that allow you to score additional points at the end of the game.

Note 1: For the purpose of the Goal cards, grey is not considered to be a valid color.

Note 2: In case of a tie, for the goal "The pyramid with the most 0-weight penguins: +5 points", all tied players score 5 points.

After 10 rounds, the game is over. Each player tallies their points by adding up:


The player with the highest score wins!

In case of a tie, the winner among tied players is the one with the Chief Penguin card, or the one sitting closest to them in clockwise order.