To be the player with the most points after 10 rounds.

Turn the red dial on the top of the Pen Timer to 10 seconds.

If you are playing with younger players, turn the dial to 15 seconds to allow additional drawing time.

To begin the game, the oldest player goes first by taking a card from the deck and rolling the die. S/he must draw the challenge on the card that corresponds to the color rolled on the die.

If a question mark was rolled, s/he can choose to draw any of the challenges on the card. The die should remain on the table in front of that player for the duration of the round so everybody remembers that s/he started the round.

Before drawing, the artist must press the yellow button on the top of the pen to start the timer and fully expose the pen tip.

S/he only has 10 seconds to draw until the tip of the pen completely retracts.

Other players try to guess what the artist is drawing to win points. Each player may only give one answer within each 10-second period.


If a player guesses correctly before time runs out, the round is over and the player who guessed correctly and the artist get the same number of points.

The number of points earned is equal to the number of players in the game. For example, if there are 6 players then the player who guessed correctly and the artist would receive 6 points each.

If no one guesses the correct answer before time runs out, the drawing and the Pen Timer are passed to the player on the artist's left and that player becomes the new artist.

The new artist looks at the card, starts the Pen Timer and continues to draw on the same drawing that the previous artist started. Any players who have already drawn are out of the round and can no longer guess what the drawing is.

The game continues until someone guesses the item being drawn, or until there are no players left to guess.

The player to the left of the player with the die goes first in the next round.

The game ends after 10 cards have been played. The player with the most points at the end is the winner. 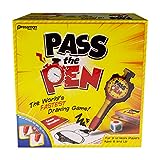 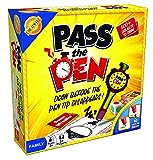