Players take on the roles of two Hikers as they trek across different Trails during the four Seasons of a Year.

Each Trail represents a different Season, and as each Season passes, the Trails change and grow steadily longer.

Each turn, players send one of their Hikers down the Trail. While on the Trail, Hikers will see beautiful Sites and perform an action when they arrive.

When a Hiker reaches the end of the Trail, they can spend tokens they have received to visit Parks and earn points. Your goal is to have the most points from your Parks, Photos, and Personal Bonus at the end of the Year.

Place the board in between all players. Place the two token trays to the left and right of the board where they are easily within reach of the players and return their lids to the box.

Each tray holds all types of tokens and also Photos, forming the supply.

Shuffle the Canteen cards face down. Deal one face up to each player. This is their starting Canteen. Place the remaining Canteen deck onto its area on the top left of the board.

Shuffle the Year deck. Deal two cards to each player. Players choose one of the two as their Personal Bonus for the Year and discard the other facedown.

These cards uniquely reward a player for how well they accomplished their personal goal at the end of the game. These should re- main facedown until scored at the game's end. For your first game, just deal one to each player. Return any unused Year cards facedown to the box.

Shuffle the Season deck. Place it onto the Season area of the board and reveal the topmost card as the first Season.

Begin creating the first Season's Trail below the board by placing the Trailhead Site tile on the far left. Separate the five Basic Site tiles (Forest, Mountain, Valley, Ocean, Vista) from the four Advanced Site tiles (Advanced Sites have an asterisk in the bottom right).

Place each additional Site to the right of the previously-placed Site until all are placed face up. Finally, place the Trail End to the right of the last Site. Make sure it is not on its SOLO side as denoted in the bottom right. The Trail for the first Season is now formed!

The four Seasons of the Year make up the four rounds of play over the course of the game. Seasons change- up gameplay each round, and the Season ends when all Hikers reach the Trail End. To begin, see how the Season will affect gameplay for the round and if any immediate action is necessary from its effect.

Look at the Season's

weather pattern displayed on the bottom right of the card. Starting with the 2nd Trail Site, place the indicated tokens from the Weather Pattern onto the Trail-one per Site-from left to right. Simply repeat this pattern down the Trail and stop at the Trail End. You're ready to begin!

The player with the First Hiker Marker takes the first turn of the Season. On a turn, a player selects either one of their Hikers and moves the Hiker to a Site of their choice down Trail- anywhere to the right of that Hiker's current location.

When the Hiker lands on the new Site, the player performs the Site's action. After taking the action, the next player clockwise takes a turn. Turns continue around the table until the Season ends.


If another Hiker-even your own-is already occupying a Site, then it cannot be visited unless you use your Campfire.

If a Hiker is the first to land on a Site with a token from the Weather Pattern, they take it into their supply as a bonus along with taking the Site's action

Note: You must be able to take a Site's action in order to visit it.

Wildlife comes in 12 different shapes and sizes, but all are simply considered wildlife. If there's any hint in the name, they're wild! They can be used in place of any other token to visit Parks or take Photos. Wildlife cannot be used in Canteens or toward buying Gear.

A brown square icon denotes that any token may be used, and the number inside specifies how many.

Players can carry up to 12 tokens with them. If you have more than 12 at the end of your turn, you must discard down to 12.

When you gain a Canteen card, place it face up in front of you on the

side. A Canteen can be filled with

on a turn to take its action.

To fill a Canteen, place a

gained that turn onto the Canteen instead of into your supply and perform the Canteen's action. Note: Canteens cannot be filled with

that was not gained on that turn.

. Once a Canteen is filled, the

remains on it until the end of the Season and cannot be used any other way.

Certain Year cards require a number of Photos to be taken

Photo, return any two tokens of your choice to the supply when choosing the action at the Vista. Photos_are worth 1 POINT each. After taking a

at the Vista, gain the

Camera from whoever currently has it.

When you have the Camera, you're on a roll! When taking a

, it only costs 1 token instead of 2. At the Season's end, the player with the

at its reduced price. Some Gear cards give players more photo opportunities outside of the Vista, but they do not give the player the Camera.

Sometimes, a Hiker is already at the Site you want to visit. To visit a Site that is occupied by another Hiker(s)-including your own-you must use your Campfire by flipping it over to the extinguished side.

If your Campfire is extinguished, you cannot visit a Site occupied by another Hiker-including your own. A player's Campfire will relight when one of their Hikers reaches Trail End.

At the Trail End

Trail End gives Hikers a moment to reflect on the journey.

When a Hiker arrives here, the player immediately relights their Campfire if it is extinguished, and then chooses one of the available areas for their Hiker- placing it vertically in the farthest right available slot of that area:

To Reserve a Park, choose one of the three available Parks on the board or draw the card on the top of the Parks deck. Place the Park card face up horizontally in front of you-keeping it separate from your vertically-stacked visited Parks.

If a Park was reserved from a board slot, re- veal a new Park from the Parks deck into the empty slot. When taking the Visit a Park action on a future turn, you may visit one of your reserved Parks or one of the three available on the board.

The first player to place their Hiker here also gains the

First Hiker Marker as a benefit by placing their Hiker in the far right slot.

After this, any number of other players may still Reserve Parks here, but they do not gain the

. The First Hiker Marker is worth 1 POINT at the end of the game.

Gear supplements your journey-giving extra benefits at Trail Sites or making it easier to visit certain Parks. To buy Gear cards, place your Hiker on the BUY GEAR area.

Sunshine equal to its cost. All Gear cards have ongoing abilities, and some have an additional

INSTANT action, activated one time immediately upon purchase. Place the Gear you acquire face up in front of you and utilize their ongoing abilities to their full potential.

In a game of 3 or fewer players, the first Hiker to BUY GEAR, places their Hiker on the

slot without 4+ on it-this gives them a 1 Sunshine discount on their Gear purchase.

After this, any number of other players may buy Gear, but do not receive the discount. In games with 4+ players, the slot farthest right is also available, so the first two Hikers to choose this option each receive a 1

discount on their Gear card.

All Gear cards have ongoing abilities, but this one also has an

action that rewards the player with a Canteen card when purchased.

Any number of Hikers can occupy the Visit a Park area. To Visit a Park, choose one of the three available Parks on the board or one of your Reserved Parks and turn in its corresponding tokens from your area back to the supply.

Take the Park card and place it vertically in your score area. The points denoted on the Park card will be scored at the end of the game. Parks can be stacked showing their resources and points. Whenever a Park is visited on the board, reveal a new Park from the Parks deck into the empty slot.


End of a Season

Once a player's two Hikers reach Trail End they will no longer take turns for the Season. When only one Hiker is left on the Trail, the player must move the Hiker to Trail End and choose an action there. This marks the end of the Season, so the player with the

. Start a new Season through these steps:

Last Hiker On The Trail

When only one Hiker remains on the Trail, the player must move that Hiker directly to the Trail End and choose an action there. Use this strategically to limit an- other player's time on the Trail.

Hiking tip: Using your Campfire wisely can be the difference between spending more time on the Trail and missing out on certain Sites.

When the fourth Season ends with its Photo opportunity, the game is over. All players reveal their Year cards, and then score points from their Parks, Photos, and Personal Bonus for their Year. The

also gives 1 Point to the player who has it.

The player with the most points at the end is the winner of Parks! 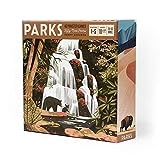