Place the wooden pieces next to the draw pile. Give each player 75 points' worth of markers (1x50, 2x10, 1x5). The remaining markers form the bank. The youngest player takes the 5 dice and starts the game.

The game is played over several rounds. Each round consists of

The game finishes once a player runs out of points.

Each player rolls the 5 dice. Each die shows the number of wooden pieces in the corresponding color that the player has to take.

Empty spaces on the truck

Each player checks how many white pieces (i.e., pieces of size 1) would fit onto his truck. For each such piece, the player pays 1 point to the bank.

Example: This truck has room for 3 more white pieces, so the player pays 3 points.

For each wooden piece that a player could not load onto his truck, he pays twice the piece's size in points.

Example: The player did not load two brown pieces (size 3). He, therefore, pays 2x2x3=12points to the bank.

Often, a player will have to pay for empty spaces and surplus pieces.

Example: This truck has space for 5 more white pieces, and the player did not load a purple piece. This costs 5 points for the empty spaces plus 10 points (2x5) for the purple piece. The player pays 15 points.

The player or players who paid the fewest points in this round receive(s) 10 bonus points.

Example: Four players have paid 14, 9, 4, and 6 points, respectively. The player who paid 4 points receives the 10 point bonus (afterpaying her 4points).

For the next round, return all wooden pieces (and truck cards), then start by rolling the dice to get wooden pieces. Game then proceeds as described above.

If there draw pile runs out, reshuffle the discarded truck cards.

The game finishes as soon as someone has no more points at the end of a round.

Whoever has the most points left is the winner (in case of a tie, the players with the highest score win together). 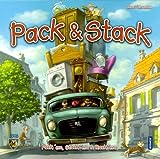