Let's Set-up The Maze Game Board

Assemble the game board by connecting the pieces together in alphabetical order like shown.

Flip the four Power Pellet tokens to reveal the Power Pellets. Place them on the four indented blank spaces in the maze, one on each corner of the board.

Take turns playing as PAC-MAN while the other players work together playing as the ghosts trying to catch him.

Move PAC-MAN around the maze collecting Pac-Dots and earning points. After each player takes a turn as PAC-MAN, the one with the highest score wins!

Pac-MAN has 1 life in this game. Pac-MAN will gain points by collecting all the Pac-Dots in each section of the maze. Complete all four sections to complete the level. PAC-MAN and the ghosts take turns moving. Here's How:

The GHOSTS now take their turn chasing him:


Play continues until either PAC-MAN collects all the Pac-Dots on the board and completes the level or is caught by a ghost.

When PAC-MAN eats a Power Pellet he becomes energized and may now eat ghosts and score points for a limited time.

If an energized PAC-MAN moves through a ghost, that ghost is eaten. Three things occur:

If PAC-MAN ends his Power Pellet die movement on a ghost, that ghost is eaten, and the ghost pawn is then removed from the board and replaced with its corresponding Ghost Eyes Token that is placed underneath PAC-MAN.

To eat a fruit token, PAC-MAN will move over it on the game board, and not land on it like a space on the maze.

Completing Sections of the Maze to Score:

When PAC-MAN has collected all the Pac-Dots in one section, or corner quadrant, of the plastic board, the PAC-MAN player collects a mini-board token of that section as a reward and places it in his score pile. It is worth 800 points!

If a player clears all 4 sections, they earn all 4 mini-board tokens for a total of 3,200 points!

If PAC-MAN does not clear a quadrant, they do not earn that board token.

Arcade purists may still want to count the Pac-Dots you collect in addition to scoring above. In this event, count each Pac-Dot as 40 points, and see how many points they earned throughout the course of a game.

If PAC-MAN successfully collects all the Pac-Dots and clears the board then he advances to level 2!

When a ghost lands on PAC-MAN, he has caught him, and the game is over.

After each player has had a turn playing as PAC-MAN, the player that had the highest score is the winner!

Now you have 3 lives as PAC-MAN.

When setting up, place 2 PAC-MAN life tokens under the maze game board to indicate how many additional lives Pac-Man has in the current game.

Add the (5) Yellow Level 2 Ghost cards to the Ghost Deck and reshuffle. These cards will make the ghosts a little bit faster than Level 1 when drawn.


Begin and play the game as normal with the following differences: 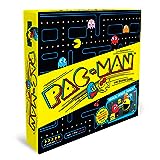 Pac-Man - The Board Game