A wily fox has stolen Mrs. Plumpert's pot pie and is high-tailing it to the foxhole!

Work together as a team of detectives, gathering clues and eliminating possible suspects. Figure out who is the guilty fox before it escapes.

1 Place the board in the center of the playing area.

2 Each player takes a detective hat and places it on a space in the center of the board.

3 Place the fox pawn on the start space (lox icon) on the edge of the board.

4 Scatter the 16 Suspect cards face down around the perimeter of the board (4 per side) and then choose any 2 to turn face up.

5 Shuffle the 16 Thief cards and without looking, insert into the top of the Clue decoder, The easiest way to do this is to hold the decoder with the window-side down and slider closed.

Then slide a Thief card into the decoder with the red "Gamewright" logo sticking up out of the back. Place the Clue decoder within reach.

6 Place the rest of the Thief cards back in the box.

7 Stack the 12 Clue markers in a facedown pile near the board.

8 Place the 3 dice within reach of play.

The player who most recently ate pie starts the game and play continues to the left.

You may roll the dice up to three times, setting aside any that match after each roll.

If all three dice show the icons that match your choice by your third roll, take one of the following actions:

A. Search For Clues

Count up the footprint icons on the dice and then move your detective pawn up to that number of spaces on the board. You may The game can end in one of three ways: move horizontally or vertically, but not diagonally.

Reveal two face down Suspect cards that are around the board. Then look at all of the face up clue markers that are on the board and check whether or not the suspects are wearing any of the items.

Use your memory to remember whether or not those items were marked "red" or "green" in the Clue decoder.

Discard any suspects who are not wearing any item that was marked red. This ends your turn.

If all three dice do not match the action that you chose by your third roll - uh ohl - the thief moves closer to the foxhole! Move the lox pawn 3 spaces forward on the fox path. This ends your turn.

Once you get good at the base game, step up the challenge by moving the fox pawn 4 spaces instead of 3. And for experts, move it 5 spaces! 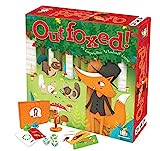 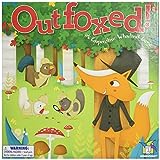