Outburst is a game of topics. Each card has a topic and 10 target answers. Each card is printed on both sides, but only one side is played at a time.

Outburst is played in teams. No matter how many people are playing, divide the players into two teams. Teams should sit together (unless you've been serving chili!).

Because Outburst is fast-paced and addictive, things can get a little wild, In an effort to maintain some order, one player should be selected to also serve as the Master of Ceremonies (M.C).. (This is not one of those rules you should question,,, just do it!)

The M.C. keeps things under control and maintains the playing order, topic selection, scoring, etc. This requires an authoritative person who happens to be honest (politicians need not apply!).

The basic concept is for you and your team to guess as many of the target answers as possible. You receive one point for each target answer you guess correctly.

Most people learn games from other people, not from the rules. But at some point somebody has to read the rules in order to figure out what's going on. Besides, the people you learn from rarely know what they're talking about!

The M.C. selects a TOPIC Card from the front of the box. Since the M.C. is also a PLAYER on one of the teams, it is important that there be no hint of cheating. (Who, me?)

The M.C. does not attempt to read the answers (which are obscured anyway), or look at the TOPIC on the back of the card. The M.C. turns to the playing team and reads aloud the TOPIC printed at the top of the card, then asks, "Play It?" or "Pass It?" No more than 30 seconds should be given for reaching this decision.


Let's assume your team likes the TOPIC read by the M.C. and elects to "Play It".

The M.C. hands the TOPIC card and the Card Viewer to a member of the opposing team who will serve as the Scorekeeper.

The timer is turned over and your team has one minute to provide answers to the TOPIC. Team members are encouraged to yell out answers at the same time (which can really annoy your opponent who is trying to keep score).

Each time one of your team members yells out an answer, the Scorekeeper announces "yes" or "no" depending on whether the answer is among the target answers on the card.

If the Scorekeeper yells out "yes", he/she also slides the button next to that answer over so the markers show. We recommend having two team members help each other in spotting the answers on the card.

Note: In the event of a disputed answer, one that is claimed to have been given but wasn't heard by the Scorekeeper - be lenient. Remember... it's a game! Besides, you can always get even later!


Before the round officially ends, determine if any Bonus Points have been won. Have one member of the playing team roll both dice.

If the playing team correctly ' guessed the answer corresponding to the number on the white die, they earn the Bonus Points showing on the blue die.

Example: If the white die shows an 8 and the blue die shows a 2, then the playing team earns 2 Bonus Points if they got the number 8 answer correct. If they didn't... tooooo bad!

If you do not like the topic read by the M.C. (you may think it's too hard) you may "Pass It". Simply announce, "We'll pass it to the other team" and place one pass chip out of play. Each team is allowed to pass on three topics per game.

Note: You are not allowed to pass a topic that was passed to you.

The first team to score 60 points by reaching finish wins! 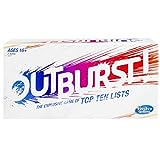 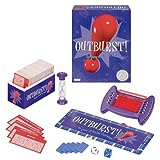