One Night Revolution is a social deduction game with secret identities. Players are either Rebel Fighters attempting to overthrow a malignant government, or Government Informants trying to thwart the Rebels.

The game takes place in a single round, the Rebel players must identify a single Informant to win; the Informants win if they remain undiscovered.

A fundamental rule of the game is that players may say anything that they want during the game, but may not always want to tell the truth until they know that it would benefit themselves. Discussion, deception, intuition, social interaction and logical deductions are all equally important to winning.

Place the HQ tableau in the center of the play area and give each player a Reference card.

Using the chart above, shuffle the appropriate numbers of ID tokens. Deal one ID token to each player face down.

Place the remaining three ID tokens on the HQ tableau, also face down. Each player secretly looks at the role assigned to them on their ID token.

For your first games, we recommend using these Specialists:

After all the players know their ID and Specialist, the Controller must ensure that all the Informants know one another by repeating the following script:

The Controller opens their eyes, completes their Specialist action, closes their eyes and says "Task Complete" to indicate they are done; then it is the player to the left's turn to repeat this process.

Each player, in clockwise order, takes their Specialist action, saying "Task Complete" to indicate they are done before the next player acts.

This continues until the player on the Controller's right finishes their Specialist action. The Controller then views their ID token before saying:

Starting with the Controller and continuing in a clockwise manner, each player must take one Specialist token indicating which Specialist action they took during the night.

Players do not have to be truthful with their selection , and they may have to take a Specialist token from another player if none of their desired tokens remain in the center.

Discussion should be limited during Specialist Declaration.

Once all players have taken a token, everyone discusses freely the roles that they started with, the actions that they took and/or any information revealed by those actions - there is no requirement to reveal all known information, nor to be truthful.

As player roles may change during the night, everyone will want to direct the discussion in order to deduce what role they possess. To win, the Rebel players will want to identify an Informant and the Informants will want to remain hidden.

During this phase, players cannot view any ID token or Specialist card.

As a visual representation, players may flip Specialist tokens to indicate those they believe to be Informants.

It is recommended that players establish a fixed time for the Day. Five to ten minutes, at least a minute per player, is a good guideline. Alternatively, a majority of players may declare the Discussion & Deduction to be complete and play proceeds to the Termination phase.

Immediately after the Discussion & Deduction phase has ended, the Controller will call a vote saying "3..2..1 .. Vote". All players must immediately point to another player, accusing them of being an Informant.

If an Informant is Terminated, the Rebel players win (even if a rebel player was also terminated).

If no Informant is Terminated, the Informants win. If all the players agree that the three Informants tokens are on the HQ tableau, they may vote in a circle to ensure no player gets two votes. In this case the Rebel players win if they were correct, but the Informants win if any player is an Informant.

For subsequent games, move the Controller marker one player to the left. Experienced players may choose which Specialists are in each game to add variety or modify the game play to their tastes. 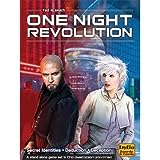