If a player has three cards of the same number or face card, he keeps one card in his hand and places the pair face down on the table.

If a player has four matching cards (2 pairs) he can put all four down on the table.

Player to the left of the dealer goes first. He makes a fan out of his cards and holds them, face down, to the player on his left. That player chooses one card from the fan without seeing it.

If the card makes a pair with a card he has in his hand, he can put the new pair face down on the table.

If not, he keeps the card. Now he fans out his cards for the player sitting to his left. Play continues in a circle, with players choosing cards and putting down pairs. Once a player has played all of his cards, he is safe.

is over when everyone has played all of their cards. The player left holding the Old Maid loses.

Try to keep a straight face if you get the Old Maid. Don't let the other players know you have it!

This deck of cards can be used to play any of your favorite card games. Simply discard the Old Maid, shuffle the deck and play! 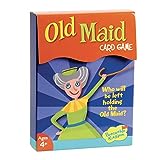 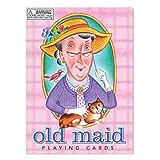