The players take the role of Workers producing Tools, Barrels, Iron, Glass, and many other Goods. The player who manages their Production Chains best will gain the most Victory Points and win.

The game is played over several rounds. Each round consists of 4 phases, which are played in the following order.

The active player deals each player 2 cards into their hand. There is no hand card limit.

When the draw pile runs out of cards, shuffle the discard pile to form a new draw pile. In the extremely unlikely case that both the draw and the discard pile contain no cards, each player must discard half of the cards in their hand (rounded down).

The active player turns over cards from the draw pile, placing them in a second row in the Market Display, until there are 2 more Half Suns. The Sun has set and the Market is closed.

If a Building produced at least 1 Good, you can immediately use the Production Chain depicted at the bottom right any number of times.

The Production Chain shows which Resource from hand or which Good that you already have you can place on the Production Building.

This way you can refine additional Goods on top of the normal Production.

Example 1: If the Mill produces Flour, you can place any number of Grain cards from your hand face down on the Mill.

These cards represent additional Flour that you produced from your own Grain reserves. Before you place the Grain face down and sideways on your Mill, you must show it to the other players.

Example 2: If the Shoemaker produces Shoes, you can make additional Shoes from Leather you produced earlier.

Move the cards from your Tanneries (each card represents 1 Leather) to your Shoemaker (turning those cards into Shoes). Great deal, since Shoes are worth 8 Coins, but Leather is only worth 6 Coins!

If the Production Chain shows 2 Resources or Goods, you must place both depicted items on the Building at the same time.

If you have 3 Clay in your hand but only 2 Coal on your Charburner, you can place 2 Coal and 2 Clay on the Brickworks, effectively producing 4 Bricks.

Note: Assistants may start a Production Chain if their building produces.

At the end of production during Phase 4, your Worker leaves the building (allowing a just purchased Assistant to be assigned to the building), but current Assistants remain at their buildings (you may pay to move them during Phase 2 of the next turn).

You can now build the Building you placed face down in front of you during phase 2. If you cannot or do not want to build it, you must discard the card.

You pay its Building cost by discarding Goods, totaling the values of the discarded Goods. You can overpay, but you do not receive any change.

After or in place of building, you can hire at most 1 Assistant per round.

Not only must you pay Coins for them, but you must also have Buildings in the colors depicted on the Assistant card. (Keep the Buildings).

Immediately place the Assistant at one of your Buildings.

At the end of phase 4, discard all of the cards in the Market Display. The next player in clockwise order becomes the active player.

Each Building color stands for a certain Resource. There is the same number of Buildings in each color except green, which is the most numerous. Gray Buildings do not count as Production Buildings-they provide a permanent benefit.

The Glaziery requires any 11 Resources to produce Glass.

In phase 1, you receive 1 additional card into your hand, unless you have more than 3 cards in hand already at the start of that phase.

The Market Office adds the depicted Resource to the Market Display for you (which you can use as one of the 11 Resources needed for the Glaziery).

The game end is triggered when any player has 8 Buildings in front of them (including their Charburner). When that happens, finish the current round and play another complete round.

After that, each player totals the Victory Points from their Buildings and Assistants, adding 1 Victory Point to that total for every 5 Coins they have in Goods (rounded down).

The player with the most Victory Points wins.

In case of a tie, the player with the most Coins left after exchanging them 5:1 for Victory Points wins. 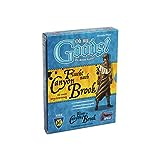