Enter a vast, underwater cosmos: a mysterious interconnected world of tentacles, sharp teeth, and black ink, where your survival depends on your ability to adapt to the unexpected

Reef Variant: Oceans was originally designed to be played without Scenario cards and without the Deep . If anyone at the table has never played Oceans , we recommend playing the Reef Variant. Otherwise, prepare to venture into the Deep!

1 Place the Reef and the Ocean board in the center of the play area. Stack the species boards nearby.

2 Place the Cambrian Explosion card with the "Reef Variant" side face-down in the first Ocean zone.

Reef Variant: Use Abundance and Fertile instead of 2 random Scenario cards.

4 Shuffle the Surface deck and deal 6 cards to each player, then place the deck face-down next to the Reef.

in the "reserve" zip-lock bag. These will get used in the last round of the game.

8 Roughly divide the supply of population tokens into 4 piles and place each pile into the 4 available locations: the Reef and the 3 Ocean zones. These piles do not need to be exact.

9 Reveal the top card from the Surface deck, and place it face-up to form the discard pile. Look at the Migrate number on the bottom left of the card, and move that number of population from both the Reef and the 1st Ocean zone into the 3rd Ocean zone.

10 Give each player a Player Screen.

11 The start player is the person who can hold their breath the longest. Give each player the correct Bonus Token according to their place in turn order. Place the token behind your Player Screen to score at the end of the game.

The goal of Oceans is to thrive in an ever-changing ecosystem where food is scarce and predators lurk. The population of your species can grow by foraging from the Reef

, or passively gaining from the Ocean

So evolve your species to best ensure their survival. At the end of the game, you will score 1 point for each population token you accumulated over the course of the game.

In addition, you may remove traits from your species anytime during this phase. Surface cards are placed face-up in the discard pile and Deep cards are removed from the game. Check for anything that needs to be reevaluated now that the trait is no longer in play (Overpopulation, maximum trait count, etc).


Evolve: Most of your cards will be played as traits to evolve one of your species. You may play a trait on a new species or on an existing species.

Playing a trait on a new species:


Playing a trait on an existing species:

Migrate: Instead of using a card to evolve, you will sometimes use a card to migrate population.

The number of population tokens you migrate is equal to the migrate number on the bottom left of the card you play.

If the migrate number is greater than the available population, only move what is available.

Forage: Add up the green icons on the traits of the feeding species to get its forage value. Take that number of population from the Reef and move them to the forager's species board.

A species that does not have any green icons on any of its trait cards automatically gets a forage value of 1.

A species may never forage if it has

regardless of whether it has other forage icons.

Attack: Choose any other species to target for an attack - including your own! Add up the red icons on the traits of the feeding species to get its attack value.

Take that number of population from the target's species board and move them to the attacker's species board. A species that does not have any red icons on any of its trait cards automatically gets an attack value of 1.

A species may never attack if it has

regardless of whether it has other attack icons.


There are several things that can happen during the feeding phase.

Go through each of the following steps:

Your turn is now over, and play passes to the player to your left.

Shell icons don't reduce the attack value of the attacking species, just the number of population it takes.

Every species in Oceans lives in the same environment: the left-most species of each player is adjacent to the right-most species of the next player. Many traits trigger based on the feeding of an adjacent species.

The arrow icon at the bottom of a trait refers to the species immediately adjacent to that side.

Feeding may trigger a gains icon on another species, including a species belonging to another player. When a species gains population, it takes the number of population in the blue gains icon from the 1st Ocean zone.

If the Tentacled species attacked again, it would take another population and the middle species would gain another 5 population (leading to overpopulation).

After each feeding, resolve everything that was triggered from the feeding, then check for overpopulation.

If a species overpopulates when resolving its own feeding, it may not feed again this turn even if it has a trait such as Tentacled that would normally allow it to feed again. Triggering another species to overpopulate does not end your feeding.

Creatures must adapt for survival, not only to compete with other species in the ecosystem, but also in response to various environmental opportunities and threats that arise. These influences are represented by Scenario cards.

Purple Scenario cards get triggered each time the Ocean zone is emptied. This might happen multiple times during a game if population is migrated (or moved because of a Deep card cost) back onto its Ocean zone.

Scenario cards activate when the last population is removed from its Ocean zone. Make sure to resolve everything triggered (like gains and overpopulating) before activating the Scenario card.

Scenario cards are designed to change the feel of the game. Some Scenarios make it more difficult for your species to thrive. Others lead to more aggressive gameplay between the players.

We put icons on the Scenario card to help you tailor your game. During setup, make sure to remove any Scenario cards that might hinder your group's experience.

Scenario cards with the diamond icon are more complex

Scenario cards with the lightning icon are events

The Cambrian Explosion is a period in Earth's history when a proliferation of new species came into existence. It took place over 500 million years ago and lasted for about 25 million years.

Scientists don't know what caused the Cambrian Explosion but it was likely due to an increase in oceanic oxygen levels.

During the Cambrian Explosion:

These species hardly seem possible in the realm of biology, and yet they turn out to be real. The Deep represents the wonder of scientific discovery, with traits ranging from actual marine biology to the fantastic. Venture into the deep at your own risk!

To evolve a species:

You do not need to pay a cost when using a Deep card to migrate population. Remove the card from the game after playing it.

The Deep is unique in its design. You can tailor it to your personal tastes without hurting the balance of the game.

After each game, we encourage you to remove any Deep cards you didn't like. Additionally, you can add cards (even multiple copies) that bring you joy.

Over time, you can create a version of Oceans that will produce the experience most fun to your game group; a legacy of your adventures in the Deep!

The last round of the game is triggered immediately when every Ocean zone is completely empty of population. Place the 60 population tokens from the "reserve" zip-lock bag into the 3rd Ocean zone and continue playing as normal.

The game ends when the final player in the turn order completes their turn, even if there is still population in the Reef.

In case of a tie, the tied player with the most trait cards on their species wins. If there is still a tie, the first person to get a job on a fishing boat in Alaska is the winner! 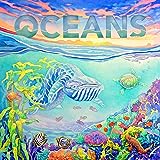