Trap your opponent by blocking them so they have "nowhere to go".

Each player selects a spy piece and places it on a raised starting space.

Each player places four blockers at random anywhere on the board except on the three bridges connected to their opponent's starting space.

Players take turns moving their spy piece across any bridges that are not blocked.

You can move as many spaces as you like during each turn, as long as you don't cross any blocked bridges.

To end your turn, place one blocker on any bridge.

Each player places a spy piece on a raised starting space.

Players then place 4 blockers each ont he board.

Players take turns moving their spy piece across any bridge not blocked by blockers and adding 1 blocker per move.

The first player to trap their opponent wins! 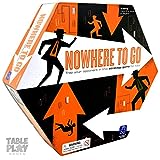 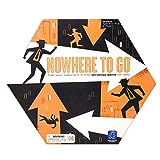