Chess was originally invented in India around the 6th century AD. Since then, Chess has be- come known as the game of kings and the greatest of games. Now that you're comfortable with how the Chess pieces move and capture, here are the rules to play Standard Chess.

Standard Chess is a game of logic. No Action cards are used. Instead, on his turn a player is free to move any one of his pieces among those that can be moved.

To play Chess well, you have to think several moves ahead. If I make this move, what piece will my opponent move? What piece will I move next? How do I put him on the defensive and take control of the game? How will I force Checkmate?

The goal of Standard Chess is to CHECKMATE the opposing King. Checkmate is the term given to a situation where a King is not only under attack but has no safe space to move onto. In other words, no matter what move it might make, the King will be captured on the next turn. When this happens, the game is over.

Note: sometimes a draw occurs, as will be explained.

Begin by flipping over the board and playing on the unmarked "official" board.

Set the 32 pieces on the board according to diagram #1.

The player with the lighter colored pieces is known as "White".

The player with the darker set is known as "Black". White always moves first. Players alternate taking turns, moving one and only one piece per turn. (There is one exception, "castling", as will be explained).

As you know from playing NO STRESS CHESS, each type of piece has its own powers of movement. A piece may only be moved according to its movement power. A piece may never move through or land on a friendly piece (although a Knight can jump over intervening pieces).

If a piece moves onto a space occupied by an opposing piece, that piece is CAPTURED and removed from the board; the moving piece must end its turn on this space.

If a piece is capable of moving several spaces in a straight line (like the Bishop, Rook and Queen), and such a line of spaces is vacant, you may elect to end its move on any space along such a line. You are never obligated to move as far as you can or capture an opposing piece by moving onto its space.

Among serious players, it is often agreed that once a piece has been touched by a player it must be moved. Decide if you want to adopt this rule.

There are 6 different kinds of pieces. Each side has an identical set of 8 Pawns, 2 Rooks, 2 Knights, 2 Bishops plus a King and a Queen,

The Power of Each Piece

Because each piece moves and captures differently, some are more powerful than others. In fact, Chess players have come to assign a "power rating" to each type of piece.

Thus, the Knight is worth 3 Pawns, while the Queen is worth 9 Pawns, or a Pawn, plus a Bishop, plus a Rook. It is useful to know this when you begin to "trade" captures during the play of the game.

Example: It would be unwise to capture a Rook if you then lost your Queen. (The exception being if such a "trade" brings about Checkmate; nothing in Chess is more important than Checkmate!)

Each player has eight Pawns situated in a row at the beginning of the game. They are the least powerful pieces. But because they can be "promoted" (as you will see) they can become very powerful.

Pawns can NEVER be moved backward or sideways. They can only move straight ahead. Pawns normally move only one square at a time. However, the first time a Pawn is moved, it may move forward one or two vacant squares.

Unlike every other type of piece Pawns have a special way to capture an opposing piece. A Pawn captures a piece that lies one space ahead on either diagonal (never directly ahead).

Should a Pawn move all the way across the board and reach a space in the farthest row from you, it will be promoted. The Pawn is exchanged for any piece that was previously captured, OR for a duplicate of any piece (except a King or Pawn).

Under normal circumstances, a player will want to exchange his Pawn for a Queen since it is the most powerful piece. Use a small object to represent a duplicated piece (some players turn a captured Rook upside down to represent a second Queen).

The new piece is placed where the Pawn ended its movement.

Ah, the Pawn! For such a simple piece, it has yet another nuance of movement. A Pawn may capture an opposing Pawn "en passant" (in passing) in one special circumstance.

If you advanced your Pawn two squares on its first move and, as a result, an enemy Pawn is now adjacent to your Pawn, the enemy Pawn can capture the advancing Pawn by moving diagonally behind it (but only on the next move of the game). This rule is not as strange as it seems.

The same result would occur if you moved your Pawn only one space forward, rather than two, and the opposing Pawn captured it on that space. Thus, the en passant rule grants more power to a Pawn that has inched its way forward and is now only two spaces from the line of enemy Pawns.

The Knight is the only piece on the board that may jump ("fly") over other pieces. This can be very helpful when attacking a closely packed enemy position. A Knight's move is "L-shaped".

It "levitates" two spaces to either side (left, right, north or south) then turns 90 degrees in either direction and lands on the adjacent space.

As you know from the "General Rules of Movement", the Knight captures an enemy piece if it is on this space. Naturally, your Knight cannot land on a space occupied by one of your other pieces.

The Bishop is a great piece to range the board when play "opens up".

The Rook, shaped like a castle, is the most powerful piece aside from the Queen. It is also an easy piece to move. A Rook moves any number of squares in a straight line along any column or row. (Rooks can never move diagonally).

The Rook takes some time to get going (in its corner position, it is well blocked). But once it is in the open, it can attack at long distances.

The Rook has one special power. It and the king can make a "castle" move. To make the spe- cial "castle" move, both the Rook and the King must not have moved previously in the game.

Further, the spaces lying between them must be vacant (meaning the pieces that started there will have moved elsewhere). AND, none of these intervening spaces can be under attack by opposing pieces (meaning no opposing piece could move onto one of these spaces on its next turn).

Castling is the only time during a Chess game that a player can move two pieces on the same turn. To castle, the King moves two squares towards the Rook. The Rook on that side then JUMPS over the King and lands on the square next to it.

This move is the only time that the King can travel more than one square at a time, and each player is allowed to castle just once during a game.

Castling is a helpful way of protecting the King, since it will end up closer to the corner of the board, where it is less vulnerable.

The Queen is the most powerful piece on the board. She can move as many squares as she desires in any straight or diagonal line direction, unless blocked by another piece. (She has the movement powers of a Bishop and a Rook combined!)

Because the Queen is so valuable, it is usually unwise to bring the Queen out too early. The early-game (cluttered) board makes her less mobile and more vulnerable to capture.

Though a weak piece, the King is the most vital, for once he is checkmated the game is lost.

The King can only move one square per turn, but may move in any direction. There is one important restriction-the King may not move into a position where he could be captured by an opposing piece. (Because of this rule, two Kings may never stand next to each other or capture each other).

You should guard your King as well as you can.

When a player's King is threatened by an opposing piece, it is said to be in "check". That means that unless the King moves, it will be captured on the next turn. When a player places the opposing King in check he announces: "check".

Since the object of the game is to Checkmate the opposing King, "checking" can lead to Checkmate because once you force the opposing King to move, you have the initiative and can continue to move additional pieces that will (hopefully) keep the King on the run until he can no longer move without being captured (Checkmate!).

The only way an opponent can avoid moving the King out of Check is by capturing the piece checking the King, or blocking its path to his King.


If you have two pieces checking the opposing King simultaneously ("double" Check), you are in an extremely power- ful position because the opposing King must move since its player cannot block or capture both of your pieces on the same move!

Either player may resign at any time. This generally happens when a player loses a major piece and the outlook for vic- tory in his case appears bleak.

A Draw results when the only two pieces on the board are Kings, regardless of their position, or if the pieces remaining on the board make Checkmate impossible (example: you cannot Checkmate an opposing King if you only have a King and a Bishop left).

Draws may be by agreement, or if the same pieces are moved back and forth to the same spaces on three consecutive turns.

A Stalemate occurs when a player's only move would cause him to place his own King (not currently in check) in Check.

As long as he can move another piece, or his King can move to an open square, Stalemate may not occur. 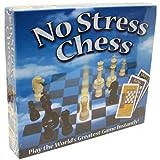 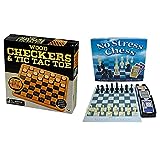