Before the start of the first game please remove all tiles from the frames.

All the rules are explained for a 4-player game. If the game has fewer than 4 players, put any unused components in the game box.

Each Player chooses a color (yellow, red, purple, or blue) and sets the following items in front of himself:

Each player takes the Player Board with the symbol of his color. This represents his Zaibatsu. He places it in front of him, and places on it (see picture below):

Note: Black cubes represent different items according to where they are located. When placed on the Budget area, they represent Coal.

Note: Black cubes on the tracks of a Player Board (Coal, Money, or Knowledge) represent Level markers.

Put the four 2x VP Multiplier tiles next to the Game Board.

Place them with the Produced Good- Blueprint side face up (icon in the top left corner with value 2, 4, or 6) next to the Game Board.

There are 6 different Goods:

The map of Japan is divided into 4 Regions. Each Region has 2 City slots.

Randomly place 1 City tile face up on each City slot of the Game Board. Also, randomize the orientation of the tile (see picture below). The remaining tile will not used in this game and is returned to the box.

Place the 48 Workers in the cloth bag.

Note: The colors of the Workers are not related to the player colors nor to the Factory colors.

Randomly draw from the bag and place 3 Workers on each Action slot of the Game Board (see picture below).

Do the same for each Worker row of the Game Board.

Put the Machinery tiles, the remaining Blueprint tiles, black cubes, and Yen notes next to the Game Board as a common supply.

When the rules state that a player has to pay, it always means he has to pay Yen, taking the notes from the Budget area of his Player Board and placing them back in the common supply.

When a player receives Yen or Coal he takes them from the common supply and places them in his Budget area.

When a Player receives or discards a certain number of Blueprints, it always refers to their value and never to the actual number of tiles.

The items in the common supply are not limited. In the unlikely event that the supply of a certain item runs out, use another means of tracking them.

Play proceeds in clockwise order, starting with the First Player, with each player taking a turn. On a player's turn, he must:

At any time during a player's turn, he can discard 3 Blueprints, and move one of his level markers up 1 step (Money track, Coal track, or Knowledge track). This may be done multiple times, discarding 3 Blueprints each time.

During the game, there will be 3 Scorings (see Scoring, page 12). After the 3rd Scoring, the game ends, and players calculate their final scores. The player with the most Victory Points wins.


I. Take A Worker

Note: if there are 2 actions shown in the Action slot, the player must choose only one of them (see page 6, Available Actions).

A player can have at most 6 Workers on his Player Board. Once he has taken 6 Workers, he must Consolidate on his next turn.

Note: The color of the taken Worker has no effect on the chosen action. It will become important when the player Consolidates (see page 11).

After the active player has completed his turn, if the Action slot where the Worker was taken from is now empty, the following two steps are performed:

If he cannot refill the Action slot with Workers, because all of the Worker rows are empty, the following 3 steps must be performed:

After the 3rd Scoring, the game ends, and players calculate their final scores.

The player must perform 1 action as shown in the Action slot from where he took the Worker.

For example, to perform a Local Market action, you must take a Worker from the rightmost Action slot.

Note: If there are two actions shown in the Action slot, the player must choose one.

A. Invest In A New Industry

Monopolistic economic giants - Zaibatsu - emerged. They ran a wide range of interconnected economic activities. The synergies made them more and more powerful.

The player must build 1 Factory.

To build a Factory, the player must:

Important: A player cannot have more than 1 Factory tile that produces the same Good.

Modernization was an all-or-nothing matter. Either every aspect of the country had to be modernized to some extent, or no single aspect could be modernized successfully.

The player must perform 1 to 3 Factory Improvements.

For each Improvement, he must pay 5,000 Yen, and then either:

Note: Once a Machinery tile is placed on a factory, it cannot be moved nor removed.

Where possible, the player must install / upgrade the Machines in his existing Factories, if any. If he cannot, he may still take 1 Machinery tile for each 5,000 Yen spent, and place them "+1" side up in front of him in his supply.

Grow the rice to feed the weaver. Weave the cloth to clothe the worker. Employ the worker to make the goods. Sell the goods to buy the rice fields.

The player must run 1 to 3 of his Factories to produce the corresponding Goods.

Note: When a Factory produces Goods, black cubes are placed on the Storage Area of the Factory tile. These cubes represent the corresponding Good (Silk, Paper, Lenses, etc)..

For each Factory he wants to run, the player must:

Note: A player may not run the same Factory more than once per turn.

Knowledge shall be sought throughout the world so as to strengthen the foundations of Imperial rule.

The player must move his Knowledge level marker up between 1 and 3 steps:

The marker cannot move beyond the topmost slot.

Japan largely skipped water power and moved straight to steam. With industrialization came the demand for coal, and a dramatic rise in production.

The player must move his Coal level marker up between 1 and 3 steps.

The marker cannot move beyond the topmost slot.

The first railroad line constructed in the Country was only 17 miles long. By 1913, the railroad network had expanded exponentially to an outstanding 7,000 miles!

Note: Trains give the player additional Influence Points during the Scorings.

In this period, the four leading Zaibatsu directly controlled one half of Japan's shipbuilding and maritime shipping.

Note: Ships could give the player additional VP during the Scorings.

If this symbol is completely revealed when a Train or a Ship tile is taken from a Player Board, the player immediately moves his marker up 1 step on the Money track, if possible. The marker cannot move beyond the topmost slot.


The player must fulfill 1 to 3 Contracts. Each player has 8 different Contracts available to him at the start of the game.

To fulfill a Contract, he must:

Cities And Demand For Goods

During the Meiji period, the Zaibatsu started to sell the products of Japan's industrial revolution to an increasingly urbanized population, and they were so successful that eventually they drove out their foreign competitors.

This is an explanation of the City and Influence slots which is needed for a better understanding of the Local Market action.

There are 2 Cities in each Region. The City tile indicates the demand for Goods in that city.

There are 4 Influence slots around each City on the Game Board, one next to each side of the City tile.

When performing the Local Market action, a player supplies one of the depicted Goods, and places one of his Influence tiles on the Influence slot corresponding to the Good he supplied to the City.

Note: The numbers depicted on the Influence slots represent the current level of ! Influence that the Overseas Companies have in the Region.

These numbers are not relevant while performing the Local Market action, but are important during the Scorings if not covered by an Influence tile.

It was not a matter of rational choice. Zaibatsu had to fill out the lacuna of the market.

The player must place 1 to 3 Influence tiles in 1 Region of the Game Board.


For each Influence tile he places, he must:

Note: If more than 1 Influence tile is placed with the same action, they must be placed in the same Region.

The value of the Influence tile the player may place varies according to the supplied Good and the number of discarded cubes (see table on the Game Board).

A player is always allowed to place a tile of a lower value.

Note: The player can always decide to split the cubes among different Influence tiles.

An Influence slot is considered available if either:

On a player's turn, if he cannot or does not want to take a Worker, he must Consolidate. He performs the following steps one at a time in this order:

If there are at least 3 Workers currently placed on his Player Board, he:

At the end of the game, each Achievement space scores VP according to the depicted image and any VP multiplier (see Reference Sheet).

Remember: The Reward tiles placed on the higher-numbered columns have higher VP multipliers on the back.

The player must pay for the Workers currently on his Player Board. The payment is 3,000 Yen for each different color. If he cannot pay, he loses 2 VP for each color he cannot pay for.

He then removes all Workers from his Player Board and places them back in the bag.

Complete the refill of the Worker rows, if needed.

Reminder: During the game, there are 3 Scorings in which each Region is scored. Scorings are triggered by the movement of the Scoring Marker.

During each Scoring, players calculate their level of Influence in each Region and then determine who has the most, secondmost, and thirdmost Influence in the Region, by summing together:

Important: The Overseas Companies count as an additional player for determining this majority. To calculate their level of Influence in a region sum the numbers depicted on the empty Influence slots of that Region.

Score each region individually: VP are scored by the players with the most, second most, and third most Influence in the Region (see the table on the Game Board).

In case of a tie, add the VP of the respective positions and divide them evenly (rounded down) between the tied players.

After the 3rd Scoring the game ends, and players calculate their final scores. 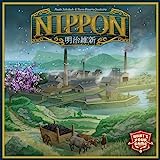