New York 1901 is a skyscraper building game based in New York City at the turn of the 20th century. Your objective is to develop the preeminent real estate empire in NYC by acquiring land and building skyscrapers to score points.

On your turn, before you build, you will be given the option to either expand your estate by acquiring new territory or to demolish your standing buildings to replace them with better ones.

Note: You can Build across different colored Territories as long as they are part of your Estate.

Workers represent your ownership of a Territory, preventing other players from Building there.

The deck of Territory Cards corresponds exactly to the Territories available on the Game Board. On your turn, you can acquire one of the faceup Territory Cards to Expand your Estate.

The Streets of New York Cards deter- mine which streets will reward you an additional 5 points if you have the most Skyscrapers standing on them at the end of the game.

Action Cards give you a one-time bonus action on the turn they are used.

Each Skyscraper in this game represents a real-world skyscraper that was at one point standing in New York City.

Note: In the base game, players unlock silver level technology at 6 points and gold level at 18.

If you have the Estate to fit one, you can Build one of the Legendary Skyscrapers as normal during the Build step of your turn. You will then place one of your King Tokens on top of it to signify that it belongs to you.

Note: Each player can only Build one Legendary Skyscraper per game.

Starter Buildings claim an initial Territory for you on the board. They are treated just like normal Skyscrapers, except they do not score points when you place them during Set Up, and they are of a Generation of Technology inferior to bronze.

When playing with 2 players:

Before beginning Set Up, remove the Character Card for David Schneider along with all the pink Territory Cards, and place them back in the box (they will not be used this game).

Important: You must remove Territory Cards so that the deck corresponds exactly to the Territories remaining on the board.

Play proceeds in a clockwise direction.

On your turn, you will advance your Estate by choosing to either:

If you have an available Worker at the start of your turn, then you can take one of the faceup Territory Cards from the Open Market and place it on top of your Character Card (to keep track of your growing Estate).

Then place a Worker on top of a Territory on the board that matches both the color and size of the Territory Card you acquired this turn.

Note: You cannot claim a Territory on the board that is already a part of another player's Estate.

When you claim a Territory, it becomes part of your Estate for the rest of the game. During the Build step, you are free to Build anywhere within your Estate, following the Rules of Construction.

After your Expand step is complete, replenish the Open Market back to 4 cards. Then you may proceed to the Build step OR pass the turn to the next player (you may choose to NOT Build this turn).

Replace your standing Skyscraper(s) with 1 superior Skyscraper. Choose which Skyscraper you will construct on your Estate during your Build step later this turn, then remove all your Skyscrapers (and Workers) that fall under its footprint.

Important: All the Skyscrapers you Demolish must be of a Generation of Technology inferior to the Skyscraper you will Build later this turn (bronze < silver < gold).

Return all the demolished Skyscrapers back to the box, they can no longer be used this game. You do not lose points for removing them.

If Demolishing and Building a new Skyscraper would leave some of the Territories in your Estate vacant (with neither Workers nor Skyscrapers in them), you MUST place one of your Workers in each of the vacated Territories. If you do not have enough Workers to do so, then you may NOT perform that Demolish action this turn.

After your Demolish step is complete, proceed to the Build step (you MUST Build this turn).

Green can only build on land in his Estate. He places a 2-square skyscraper and scores 2 points (then reclaims his Worker).

The end of the game is triggered when either:

When you trigger the end of the game, you will complete your final turn. Each other player will then take one final turn, before the game proceeds to the Scoring Phase.

In the case of a tie, the player with the tallest Legendary Skyscraper (as indicated by the height printed on it) is the winner.

If you have no available Workers at the start of your turn, and you cannot or do not wish to Demolish, then you can skip the Expand step, and go straight to the Build step instead.

Note: If you do have available Workers and you cannot or do not wish to Demolish, then you must claim a new Territory on your turn.

If you have no available Workers at the start of your turn AND you cannot Build (or Demolish) on your turn, then you MUST reclaim one of your Workers from the board and return a corresponding Territory Card from the top of your Character Card back to the bottom of the Future Market, then pass the turn to the next player. 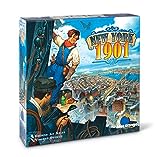