Players race to solve Scrambles and advance on the game board as Scrambles are solved. The first player to reach the 'Finish' space is the winner of the game.

When there are only 2 players or teams, Mystify is played in a head-to-head format. Each player/team takes turns being the card reader, while the other player/team tries to solve the Scramble before time runs out.

Note: in this version, if you give the correct answer within the first 30 seconds, add '3' to your roll.

Mystify may be played by groups of any size. For larger gatherings - parties, classrooms, etc - the game may be altered as follows: 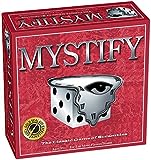