Mystery of the Abbey Game Rules Thee peaceful (Templars' Abbey is a rare leaven of tranquility for road weary travelers. And so you found it when you arrived late last night. That serenity was shattered this morning with the discovery of the lifeless body of Brother Adelmo at the foot of the Monastery cliffs.

Did the usually nimble-footed Brother slip to his death? Or did someone help him in his fall? All signs point to foul play… and the Abbot has asked you and your companions to investigate and find the answer to the question, "Who killed Brother Adelmo?"

Place the Abbey's board map in the center of the table. Each player chooses a colored monk miniature and puts it in the Chapel (Ecdesia). These miniatures will be the players' pawns throughout the game.

Shuffle the 24 Suspect cards, and place one, face down, under the Abbey's game board. This is the culprit, whose iden- tity players will compete to discover.

Place 5 (if three or six players) or 3 (if four or five players) Suspect cards face down on the matching suspect position in the upper corner of the Abbey's board.

Deal all remaining suspect cards to the players:

Give the Mass bell and the eight Mass cards, stacked in chronological order (Matins, Lauds, Prime, Terce, Sexte, None, Vespers and Compline) to the first player (determined by rolling one of the Monk dice). If the dice shows the color of one of the monks that is not in play, re-roll until it does. The same rule will apply to all dice rolls throughout the game.

The first player puts the Mass cards in front of him. At the beginning of his first turn, he will place the bell on the circled 1 on the topmost Matins card.

Two dice are now rolled to determine the last two monks who have been to confession. Place one dice each in the two confessionals.

You are now ready to explore the Abbey and discover the murderous culprit!

An important stop on the pilgrimage to Saint-Jacques, the Abbey of the Templars is currently home to twenty-four monks. These monks have traits and physical characteristics as diverse as the orders they represent.

Each monk has five important characteristics:

Each investigator's job is to carefully question the monastery's inhabitants and search through the Abbey's various rooms to accurately uncover and reveal the specific characteristics (order, title, hood, facial hair and girth), and the name of the culprit.

They lose points when making an incorrect revelation or accusation. The revelations and accusations are recorded throughout the game; the corresponding victory points attributed and totaled at the end of the game, once the culprit has been caught.

The winner is the player with the highest number of points then (often, but not always, the one who found the culprit).

Note: the following rules are written for3-5 players.

Players play in successive turns, clockwise, starting with the first player of the turn. Each turn consists of the following:

If your pawn ends its move in a room already occupied by another player's pawn, you must ask that player a question. If multiple pawns are present, you may choose to question whichever player you want.

The questioned player may either:

As all players have taken a vow of honesty, all questions must be answered truthfully, to the best of the players' knowl- edge or recollection.

You may ask any kind of question, as long as it can be answered without giving a suspect's name. You may, however, supply one or more names as part of your question.


Rooms In The Monastery

Different activities take place in various rooms within the Abbey. Below is a description of the rooms and what takes place in each of them.

Note: The board is labeled in the common language of the Abbey-Latin. For the convenience of those who were sleeping during Latin class, the room names and their Latin equivalents are provided in English.

The Confessional is where both sins and secrets are revealed. Randomly draw a Suspect card from the hand of the last player who visited this same confessional, as indicated by the color of the monk dis- played on the upturned face of the dice.

Then, turn the dice to your own pawn's color, to show that you are now the last player to have gone through this confessional.

There may be only one pawn at a time in each confessional.

Beware: One of the confessionals can only be entered through the Courtyard (Aula), not directly from the Chapel.

A Monk expects his cell to remain private. If you dare a visit, you may randomly draw a Suspect card from the hand of the cell's owner, indicated by the color of the cell. There may be only one pawn at a time in each cell.

Beware: the owner of a cell may enter it even if there is already another pawn in it.

In this case, the intruder is caught in the act. He must immediately give back the card he took from the cell's owner (if he doesn't have this card anymore, then another card is drawn randomly from his hand). The intruder is then moved to the Chapel for Penance.

There's no telling what secrets a lucky monk might learn from a book found in the Scriptorium. Take a ''Scriptorium" card.

Special books, (designated by a star on the card) can be removed from the scriptorium. Don't show the card but keep it in front you, face down, to use it at the appropriate time indicated on the card.

If there is a die on the card, roll a die to determine which other player is effected.

The most precious books and forbidden texts are kept out of sight in a remote alcove of the library.

A player may only visit the library once during the entire game.

When you are within the library, draw a ''Bibliotheca" card and read the text aloud. Its effects apply immediately.

News from the secular world outside of the Abbey arrive in the Parlor.

If there are still Suspect cards in the suspects draw pile on the game board, draw the first one and add it to your hand.

If there are no Suspect cards remaining, you may ask the player of your choice to show you a Suspect card. You must specify one or two (no more) characteristics of the Suspect card you want to see (i.e. " Show me a Templar " or " Show me a bearded novice ").

If the questioned player has one or more cards of the specified type, he shows you one (and only one). If he has none, he may say so and does not have to reveal any cards. The vow of honesty still applies here.

Praying over the holy relics of Saint Galbert, entombed within the Crypt, fills you with rapture!

Draw a "Crypta" card. You may use later at any time during the game to immediately play an extra turn after ful- filling your normal turn. Each player may only have one Crypta card at a time.

The great meetings of the Abbey take place in the Chapter Hall. You may make a Revelation orbring an Accusation. You have no obligation to do either.

and other empty rooms...

These rooms provide living space for the Abbey's inhabitants, but have no other purpose. Moving through them counts as one of the two steps you are granted each turn. Please note that the Cloister is made of four distinct, separate spaces.


Events In The Monastery's Life

Despite the customary silence, rumors circulate best during services. Mass is held in the Chapel (Ecdesia), every four turns, and marks the rhythm of monastic life. During Mass:

Monks can go to the Abbot who presides over the Chapter Hall (Capitulum) to make a revelation. A revelation is a public announcement to all the players that you have discovered one (and only one) characteristic of the guilty monk.

All revelations are written down on a piece of paper, and verified at the end of the game, once the culprit has been revealed. Each correct revelation is worth +2 points, each false revelation -1 point.

No accusation can be made as long as there are still Suspect cards to be had from going into the parlor.

To make an Accusation, a monk must visit the Abbot in the Chapter Hall (Capitulum) and publicly name the monk he suspects is the culprit.

If the accused monk's card is in another player's hand, this player must show it to all to prove that the accused is innocent. The pawn of the accuser who wronged him is then moved to the Chapel for Penance (see below), and the player who made the unjust accusation loses 2 points.

If no player has the accused monk card in hand, the accused must be guilty (confirmed by the card hidden under the game board). The game ends and the player who correctly named the culprit scores 4 points.

Calculate each player's score. (See Scoring below) The player with the highest score is declared the winner. In the event of a tie, the player who found the culprit is the winner.

A player caught in the act of searching another player's cell or making a false accusation must repent. The same applies to the first player if he forgets to move the Mass bell (or call Mass every fourth turn) at the beginning of his turn, before moving his pawn.

By common agreement, players may also decide to impose a penance on a player who makes a mistake by playing out of turn, asking a forbidden question, or gets too excited and spills consecrated wine, coffee or whisky on the game board.

The pawn in penance is placed in the Chapel (Ecdesia) where he must spend a whole turn praying. He therefore skips his next turn, and may neither ask nor answer questions while there. If a pawn goes to penance just before the Mass, he must skip his first turn after Mass.

The winner is the player with the most points (not necessarily the one who found the culprit). When the culprit is discovered, players calculate the score as follows:

In the event of a tie, the winner is the player who discovers the culprit.

Players may decide to play multiple games and add the total number of points to determine the overall winner.

Players who want a less uncertain, more tactical, game can modify the rules as follows: 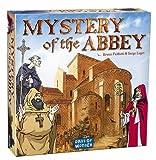 Mystery of the Abbey

Mystery of the Abbey