Children can have fun while learning how a clock functions and how to tell the time.

Step by step, children will become familiar with full hours, half hours, and minutes over the course of 3 games.

You can set the time on the big clock with the movable hands. The long hand touches the numbers. This hand counts the minutes. In one hour it travels completely around the clock face. Once it has landed on 12 again, one whole hour of time has gone by.

The short hand points to the numbers but doesn't touch them. It shows us the hour. In one hour it travels only from one number to the next one.

The hands always move in the same direction: clockwise. Together they show us what time it is.

On the 27 cards you can see different times.

On one side is a standard clock face. Each card shows a different time.

On the other side, the time is shown in numbers, like on a digital clock and split into am and pm.


Before each game, choose which cards you wish to play with. In the beginning you might start with only the full hours. Later you can add cards showing different times.

Go over the concept of am (midnight to noon) and pm (noon to midnight) w th your child by discussing the yellow, daylight times and blue, nighttimes.

Learn about the clock and the hours of the day.

First choose the cards you wish to play with. Place them colorful side up in a row and put them in order, according to the time shown on them.

The player who already knows the clock reads the time on the first card aloud.

Together you now consider what you would normally be doing at that time - whether early or late in the day. For example, what do you usually do at 7 o'clock in the morning? Wake up? Have breakfast?

Continue to go through the whole row of cards in this way.

Select the cards you want to play with. Place them with the digital times facing up inside the game box lid.

The youngest player starts and play continues in a clockwise direction. On your turn, take a card from the box lid without letting the other players see the clock on it. Now announce the time to everyone.

The player to your left takes the big clock and sets the time on it that you announced.

Now compare the hands on the big clock to the ones shown on the card.

If the player set the time on the big clock correctly, they get to keep the card. If they set the clock incorrectly, the card is put back into the box.

Now the next player takes a card from the box and says the time.

The game ends when all the cards have been removed from the box. The player who got the most cards is the winner.

You can also play this game on your own. Take a card from the box and try to set the digital time it shows on the big clock.

Then turn the card over and compare the clocks.

To recognize the time as quickly as you can.

All cards are spread around on the table with the clock faces facing up. The oldest player starts and play continues in a clockwise direction. On your turn, set any time you like on the big clock.

Now show the clock to the other players and announce what time it is. Then slowly count aloud to 10.

In this time all the other players try to pick out a card that they think matches that time. Once each player has chosen a card, each one reads the time on their card aloud. Then you compare which card matches the time shown on the big clock the best.

The player who chose that card may keep it and place it in front of them. The other cards are put back.

Then the big clock is passed to the next player to take a turn.

The first player to have collected 3 cards wins the game. 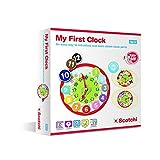