Correctly guess the words your teammates build to be the first team to reach the final lily pad.

Divide the players into teams (fewer teams is better). Each team selects a team frog and places the frog on the starting lily pad.

Decide which words to use: easy or hard, or mix 'em up. (Easy is recommended at first). The team with the youngest player goes first.

Each team selects a Morphologist: the person who will create the first word. This position rotates each round on each team.

Each team starts by playing the first lily pad (labeled Start/Free Play) first. Once your team correctly guesses the word from that lily pad, you roll and move forward.

Fun Option - Before starting a game, players may agree to select one House Piece (an object from around the house). The House Piece is added to the mix of Morphology props for use by all teams.

The first team to get to the Final Lily Pad wins!

The Morphologist from the starting team selects a card but does not show the card to his/her team.

Team members try to guess the word before time expires.

If a team correctly guesses the word in the allotted time, the team moves their frog forward to the next lily pad.

The die is ALWAYS passed to the left for the next team to play.

Teams can only finish the game by correctly guessing a word on the "Pick 5+1" lily pad to reach the Final Lily Pad.

When you are the Morphologist, it's your chance to let your creativity shine! A few guidelines:

Think of yourself as a puppeteer, and the pieces as your puppets. Here are some examples:

The If the word is "jump", the Morphologist cannot jump up and down.

The Morphologist can, however, take a piece and move that piece like it is jumping up and down.

If the word is "toothbrush", the Morphologists can't brush their own teeth, but they can brush the teeth of the little wooden person in the game.

Note: These rules CHANGE when you land on the lily pads that say "Morph" or "Ribbit, Ribbit" (we'll tell you more about that later).

Refer back to these rules once you start rolling the dice.

Show off your Morphologist skills in this final challenge!

This is like "Free Play" except the opposing team selects 5 unique pieces for the building team to use.

They make their selection without viewing the word, and the pieces must all be different types (i.e. the string, a glass bead and a wooden stick-NOT three differently colored cubes).

Once the 5 pieces have been chosen, the Morphologist gets to look at the word and select one additional piece to use.

Note: if a team is on the last lily pad (Pick 5+1), this team is not allowed to advance forward or win the game from another team's "Interception" or "Everybody Plays" turn. They are still allowed to guess, but if they win, they do not move forward. 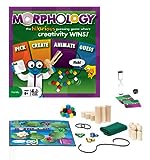 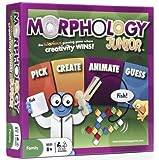