Each player takes his turn in clockwise order. The player least afraid of monsters starts. The players try to find a toy that will scare the monsters away.

Each monster is only afraid of one specific toy, illustrated in the top right corner of the Monster card.

On your turn, flip a Toy tile and one of two things happens:

In short, each time a player is wrong, he must flip a Progression card. After three failed attempts, once all the Progression cards are the same color (all blue or all red), you add one new monster around the bed.

The players win if they succeed in sending every single monster in the closet!

The monsters win if they occupy all four spaces around the bed. They also win if you have to reveal a Monster card (because the third Progression card is flipped) and the monster pile is empty.

If the monsters win, the best thing to do is to play another game to get back at them.

At the beginning of the game, place them with the other tiles without looking at them. During the game, the first time you flip one over, it has no effect. You set it face down WITHOUT flipping a Progression card.

The next time you flip over one of the special tiles (the one you saw or the other one), apply the appropriate effect:

"Monsters in a pack" Variant

The monsters form a pack. The more monsters there are, the harder they are to scare away! If several monsters are around the bed, they must all be eliminated at the same time.

When you turn a tile that scares a monster away, you leave it face up and must find all the necessary toys to chase the other monsters that are around the bed.

If you make a mistake, you set the Toy tiles face down, no monsters go into the closet, and, as usual, a Progression card is flipped over.

Before the first turn, place every Toy tile face up for 10 seconds so everyone can see them and then flip them back face down.

Now, a new monster card appears after only two failed attempts instead of three!

Play with the same rules but do not use the Progression cards. This implies that there can only be one monster on the table at any time... You can't lose!

A new monster only appears when you send the one that is around the bed into the closet.

When the player flips the right toy, he keeps the monster card instead of sending it into the closet. At the end of the game, the player with the most cards wins. 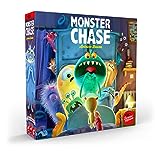