Be the player with the most money at the end of the game.

Place one of each coin (totaling 410 ) on "Money Bags" pictured at the top of the board. This is the pot.

Each player chooses a game marker and places it on "Start".

If the player spins "Money Bags", he or she takes the amount earned from the bank using any coins. However, instead of keeping the money, he or she must put it in the "Money Bags" pot on the board.

Special Spaces on the Board

When a player lands on a $ space, he or she takes all the coins from the "Money Bags" pot. Replenish the pot with another 410 from the bank.

When a player lands on a blue Bank Exchange space, a player may exchange coins of lesser value for a coin(s) of greater value (or dollar bill) from the bank.

For example, a player can exchange 2 dimes and 1 nickel for 1 quarter.

Note: if the bank runs of a particular coin, ask all players to make an exchange by turning in the coin(s) needed. No "interest" is earned for this exchange.

The game is over when one player reaches the finish space. That player takes the "Money Bags" pot and adds it to his or her earnings.

Each player counts his or her money. The player with the most money wins! 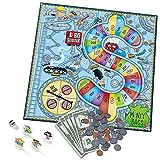