Tips for the First Game

Before the very first game of MENARA, it is advisable simply to build a tower without using the construction plan cards. Just observe the rules for placing the columns and building the temple floors. This way, you get a feel for the architecture of the temple of MENARA.

After that, look at the construction plan cards in order to get an idea of what kinds of tasks exist in which pile. 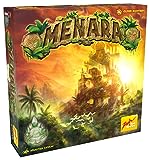