Are you all about instant gratification? Or can you be patient enough to wait for a greater reward later?

Test your willpower by winning tricks and collecting marshmallows for your opponent's tricks. The first player to 20 points wins.

The dealer begins the round by playing a card from their hand face up to the middle of the playing area, starting the "trick". Play proceeds clockwise, with each player adding one of their own cards face up to the trick as well.

When playing a card, the following rules apply:

When each player has played a card, whoever played the highest card in the lead suit wins the trick. Note: During the first round, there is no trump suit (see "Starting a New Round" for more).

The player who won the trick collects all of the cards from the center of the play area, and puts them face down in a stack in front of themself. (As you collect further tricks, place each one in a separate stack, so that it's clear how many tricks each player has).

The winner of that trick continues the round by playing a card from their hand to start the next trick.

Once a player collects a specific number of tricks, they're out for the rest of the round and receive marshmallow tokens equal to the total number of all other players' face-down tricks. The number of tricks required varies based on the number of players, as follows:

After you go out, discard any remaining cards in your hand to the side, face down, but leave your tricks in front of you, as these will continue to be counted toward other players'scores.

Of the remaining players, the next player in clockwise order starts the next trick.

Example: In this four-player game. Player A has just won their third trick and therefore goes out for the round. They collect a total of 4 marshmallow tokens: 2 for Player B's tricks and 1 each for Player C's and D's tricks. Player B starts the next trick.

A round ends when there's only one player remaining who hasn't gone out. That player does not receive any marshmallows and becomes the dealer for the next round.

In a five-player game, it's possible that more than one player remains in the round, even after all 12 tricks have been played. When this happens, none of the remaining players receive any marshmallows.

If the player who collected the most recent trick has not gone out, they are the dealer for the next round.

However, if the player who collected the most recent trick did go out, they receive their marshmallows as usual and the first player, in clockwise order, who still remains in the round becomes the next dealer instead.

The dealer for the second round (and beyond) reshuffle all the cards (including any that were set aside) and deals each player a new hand of 12 cards.

Then - after the dealer has examined their cards - they declare one of the five suits as the "trump suit"Cards of this suit will beat all other suits for the duration of the round.

The dealer begins the round, as before, and the round plays out just like the previous one, with the following addition:


When each player has played a card, the winner of the trick is determined as follows:

Continue playing rounds until one player collects a total of 20 (or more) points.

The game ends instantly when this happens. The current round is not completed, and the successful player is the winner. 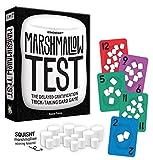