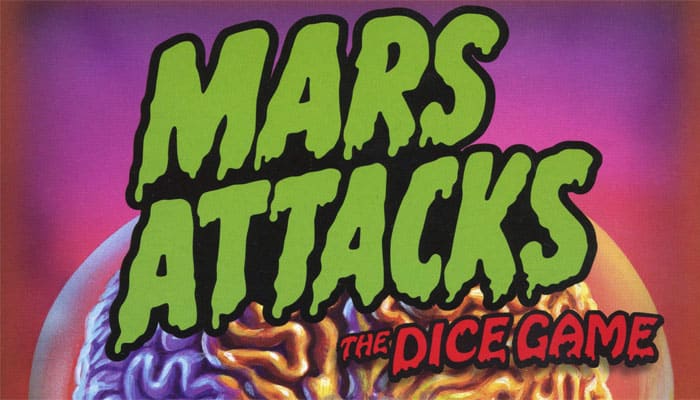 Bring the puny people of Earth under heel - in true invader fashion! Destroy the human cities! Destroy anyone who gets in your way! Take pictures of famous monuments for your trophy wall. . . and then destroy the monuments!

Each player takes four player tokens of one color.


Place the two-sided difficulty card on the table so that all players can see it. For an easier game, place the card so that two Nuke symbols are showing. For a harder game, flip the card over so that only one Nuke symbol is showing.

Shuffle the remaining cards and deal out a row of four stacks in the center of the table. The number of cards in each stack should match the number of players in the game.

For example, a five-player game will have five cards in each of the four stacks. Place any remaining cards back in the box without revealing them.

These face-up cards are considered in play until a player claims them. When you claim a card, turn over the next card in the stack to put it in play. The difficulty card is in play for the entire game.

During the game, you can target cards in play and roll the dice to try to match the symbols shown in the numbered spaces. After you have rolled enough matching symbols to meet or exceed the highest numbered space on the targeted card, you claim that card and your turn ends. Play passes to the left.

Sometimes it can take multiple turns for you to accumulate enough matching symbols, so use your player tokens to mark your progress on the targeted cards. When you target that card again later, your results add to your previous total.

Each card you claim is worth victory points (VP). See Figure 5 at right. The player with the most VP at the end of the game is the winner!


Martians represent your invading army, and they often allow you to re-roll dice during your turn.

Ray Guns are needed to destroy most of the human cities!

Nukes are detonating as the humans try to repel your attack!

In addition to the difficulty card, there are two other types of cards: cities and monuments.

Cities are the most common cards in the game. In most instances, you must roll Ray Guns to claim cities, but some have different requirements.

When targeting a monument, you must roll Martians. Any Martians you roll apply toward destroying the monument and cannot be re-rolled. Monuments provide a lot of VP, so it is more difficult to claim them.

Some cards have special rules printed on them. Whenever a special rule contradicts the normal game rules, follow the instructions on the card.

Special rules outlined in red are active only while the card is in play. The red special rule is no longer in effect after a player claims the card, resolves its effects, and ends the turn.

For example, Indianapolis allows you to take an additional turn immediately after the turn in which you claimed the card.

Special rules outlined in green are active only after the card has been claimed. These rules are labeled as ONGOING on the card and remain in effect for the rest of the game for the player who claimed the card.

That player is not required to take advantage of any ongoing rules on a turn, unless the rule says otherwise.


For example, Seattle allows you to put one die on any result you want before rolling the remaining dice, and that die counts as part of your normal roll.

Each turn consists of the following steps.

Check to see if any special rules affect your turn.

Choose one of the cards in play and announce that choice to the other players. Unless a card says otherwise, you may target any card in play except for the difficulty card. You cannot target any cards that have already been claimed - claimed cards are no longer in play.

If the targeted card has an opponent's player token on it (see the Continue the Attack? section), you may still target that card. You could claim the card first!

If one of your tokens is on a card from a previous turn, you may target that card again and add to your total. You are not required to target the same card again. Do not move an opponent's token. All players track their progress individually with their own tokens.

Roll all ten dice and determine your results. After you have rolled the dice, several things may occur.

Whenever you roll any Nuke symbols, place those dice directly on the Nuke symbols in the lower-right corners of the cards in play. Use one die to cover one Nuke symbol.

If you cover up ALL of the Nuke symbols on the cards in play (including the difficulty card), you have been nuked - you do not get to use any other results you may have rolled, and your turn ends.

Once you have rolled enough matching symbols to meet the requirements on the targeted card (if you have not been nuked), you must claim that card. Resolve any special rules and place that card face-up in front of you. All players should be able to see your total VP and any ongoing special rules you have available to use.

You may only claim one card per turn.

After rolling the dice, if you have not been nuked, but have not met the requirements to claim your targeted card, you have two options: continue your turn by re-rolling all of your Martians, or stop and end your turn.

When you continue your turn, you must re-roll ALL of the dice showing Martians (but see "Monuments"). Your Ray Guns and Nukes cannot be re-rolled. You may continue trying to improve your results as long as you have Martians to re-roll, but beware - you can still be nuked.

After re-rolling, if you have not been nuked and you meet the requirements of the targeted card, claim the card, resolve any special rules, and end your turn. If you run out of Martians to re-roll, you must end your turn.

When you decide to stop, you do not get to roll again. Place one of your Martian tokens on the targeted card, covering the numbered space equal to the number of required symbols you rolled that turn.


When targeting a monument, Martians are needed to claim the card, so they may not be re-rolled. You must stop and end your turn after your first roll.

Place one of your player tokens on the numbered space that matches the number of Martians you rolled. If you already have a token on that card, move your token to show the new total.

When a player claims the last card from one of the stacks in the center of the table, keep playing until it is the first player's turn again. The game ends before the first player takes another turn.

Add up the VP on all of the cards you have claimed during the game.

The player with the highest VP total wins!

If there is a tie, the player that claimed the most cards wins. If there is still a tie, the tied player latest in turn order is the winner. 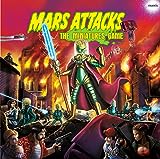