The rug market in Marrakesh square is on tenterhooks, the best salesperson will soon be named. Each salesperson tries to have the highest number of rugs visible at the end of the game while also amassing the biggest fortune.

The player with the biggest fortune (worked out by adding together the number of visible rugs and the amount of money held by each salesperson) wins.

Place Assam in the center of the market square. Each player receives 30 Dirhams. If there are 3 players, each receives 15 rugs of the same color which they place in front of them.

If there are 4 players, each receives 12 rugs of the same color. Decide who plays first. Play moves in a clockwise direction, players taking it in turns to play.

The player chooses in which direction they want to move Assam before throwing the dice, Assam can be left alone or turned 90° left or right (he cannot turn 180°).

The player then throws the dice: the number of slippers indicated on the dice determines how many squares Assam is moved. Assam moves in a straight line (not diagonally) in the direction initially selected.

If Assam leaves the market, he follows the about-turn signalled by the arrows (the arrows do not count as a move).

If Assam ends his move on an opposing player's rug, the player must make a payment to the rug's owner.

The sides of the squares must be touching, it does not count if they only touch diagonally; Assam's square counts towards the payment.

The player makes no payment if Assam ends his move on an empty square or on one of the player's own rugs.

The player then lays one of their rugs next to the square where Assam has finished, an edge of the rug must be placed against one of the 4 sides of this square.

A rug can be placed on:

An opponent's mg cannot be entirely covered in one go (it can only be covered completely by two rugs).

The game ends once the last rug is laid. Each half of a rug visible and each Dirham counts as one point, The player with the most points wins the game.

In the case of a tie, the player with the most Dirhams wins.

Each player receives 30 Dirhams and 24 rugs of 2 different colors, they should be mixed together in a pile The rugs are then laid in order from the pile

Play proceeds following the 3 or 4 player version indicated above. 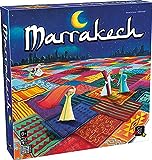 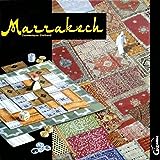