Be the first player to score 500 points by creating wacky headlines.

Shuffle the red cards and put the pile face down next to the board.

Shuffle the blue cards and deal five cards randomly to each player, then put the remaining cards in a face-down pile next to the board.

Each player chooses a pawn and places it on Home.

A game of Man Bites Dog consists of multiple rounds until one player has scored 500 total points. Play begins with the youngest player and proceeds to the left.

At the beginning of the round, the oldest player turns over the top three cards from the red deck and places them face-up in the red "Extra" spaces on the board.

Each player then examines their hand and decides whether to discard any cards. The oldest player discards first, and then players discard going clockwise. Each player may discard up to three cards.

After each player has discarded his or her unwanted cards, they are dealt an equal number of cards from the deck to replace the discarded cards.

On each player's turn, he or she creates a headline of up to seven cards in the Headline spaces on the game board. Headlines can consist of any number of blue cards from a player's hand, and up to two of the face-up red cards in the "Extra" spaces. Headlines may be funny and wacky, but they must make sense given the subjects. For example:


Players are awarded points based on the total point value of the cards played to make up the headline. If a player uses all five of the blue cards in his or her hand on a single headline, that player is awarded an additional 10 points.

If a player cannot make a headline, he or she may pass the turn and discard any number of cards from his or her hand, then draw back up to five blue cards.

After the player plays his or her headline, he or she totals the points from the cards played, then moves his or her pawn that many points forward on the game board.

The player then discards all the blue cards on the board into the designated discard pile and draws that many blue cards from the deck back into his or her hand. The red cards are moved out of the Headline spaces back into the red "Extra" spaces, and play passes to the next player.

At the end of each round, discard the red cards into a designated discard pile. Then, if no player has scored 500 points, the youngest player flips over another three red cards to begin the next round.

Any player may challenge the acceptability of another player's headline. If this happens all players, except the player who created the headline, vote on whether the headline is acceptable.

In case of a tie, the active player may also vote. If a headline is voted unacceptable, the player who created the headline must pick up his or her blue cards and may play another headline, but must deduct 20 points from his or her round score.

Players might draw a blank blue card. These are create-your-own cards! Players may play this card and use the dry erase marker to write any noun or adjective to make a headline.

After the card is used, erase the word from the card and put it in the discard pile with the rest of the blue cards.

Note: Beginners may remove the create-your-own cards before shuffling for easier game play.

There are three types of exclusive cards that a player may use to give his or her story a boost.

On his or her turn, a player may play a single exclusive card from his or her hand and place it directly into the discard pile, for the following bonuses:

If the two players have the same score, the game is a tie. 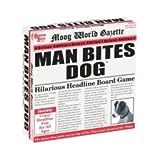 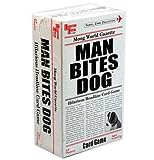