Be the first team to reach 30 points. Points are scored when a team solves a Mad Gab puzzle. The puzzles consist of a set of unrelated words that, when read aloud, sound like familiar phrases, names, places, etc.

For example' "Europe Lace Sore Mind" sounds like "Your Place or Mine" once you say it loud.

Teams try to solve three puzzles before the times stops. If you solve all three, you can score bonus points! Or if you don't, the "Stealing" team may then gain points by solving any puzzles the "Solving" team could not. Mad Gab is contagious and addictive! The more you play the better you get!

Mad Gab is best played by two teams. Pick your teams; it's okay if they don't have the same number of players.

Each card has four puzzles. Players choose which side of the card to play. Puzzle clues are in the word bubbles in big type. Their answers are on the opposite side of the card in the upper right hand corner.

Team 1 chooses one player to give the clues, load the card fipper and coach the puzzler Guesser. (More on coaching later!) That player "loads the card flipper" by putting three cards in the fipper face down with the chosen color facing out of the fipper.

Team 1 also decides if one or more team members will be guessing and sounding out the puzzles (i.e., you can all be silly mad gabbers all at once or take turns, which we recommend).

Team 2 chooses one player to be the Stealer; that person may not see the puzzle answers and may get a chance to steal them if all three puzzles are not solved by the solving team.

Team 2 also chooses one player to be the Scorekeeper. That player will start the Sand Timer, keep track of any bonus points earned.

The Sand Timer label is divided into three sections: 3, 2 or 1 bonus points. Points are earned depending on how much time the Guesser takes to solve the Mad Gab puzzles. You must solve all three puzzles in order to earn bonus points!

Player 1: The Coach - Loads, flips, coaches and judges if the puzzles are solved.

Player 1: The Stealer - Listens to and looks at puzzles read by opponent, with the possibility of stealing.

Once the cards are loaded in the flipper and it's clear who's what, it's time to play.

The Coach on the Solving team flips up the flipper facing the Guesser(s). The Coach can see the answer to the puzzle in the upper right hand corner of the card.

The Guesser starts saying OUT LOUD the clues. Come on, don't be shy! Coach: feel free to laugh out loud as you'll know what the Guesser is trying to say while he will not!

The Scorekeeper on the Stealing Team turns over the Sand Timer just as the card fipper is flipped.

The Solvers have until the Sand Timer runs out to solve all three puzzles and score points. The faster you gab, the more you score! Each Mad Gab Puzzle is worth 1 point.

The Coach is (surprise!) able to coach the Guesser by directing him how to say the puzzle. The coach cannot look at the puzzle clue but may give clues on which words to emphasize to order to get the answer.

Tell your Guesser to emphasize certain syllables, or say the puzzle faster or slower. Example: "Blend the first and second word together!" The coach may NOT give hints as to the topic or answer of the puzzle such as "It's an actor".

The Coach's most important role is to get the Guesser to continue to say the Mad Gab puzzles out loud so they can hear the answer!

Once a puzzle is solved, the Coach pulls the card from the fipper and places it down, revealing the next card in the flipper.

The solving team can pass on a puzzle if it's too hard or if you're just plain tired of sounding out the clues. The Coach should pull the passed card out of the fipper and put the card face down to the side.

The card is now "dead" to the Solving team; they may not go back to it, even if time remains. And remember; you cannot score bonus points unless you solve all three puzzles on your turn.

If the Solving team has not guessed all three puzzles once the timer stops, the Stealing team now has its chance!

The Stealer from Team 2 may now try to steal the puzzles that have been passed on or are visible in the flipper (i.e. only cards that the other team has tried to guess). However, he may not look at the passed card; he may try to steal it from memory.

You have about 10 seconds for this - no stalling, you big Stealer!

Teams alternate turns, choosing a different Coach and Stealer, etc. on each turn. Play continues until a team reaches 30 points.

In the event of a tie, teams choose one player from each team to sit out. These players choose the final puzzle and load that card into the flipper. It is then tilted up to face both teams.

The first team to solve the puzzle is the winner!

Note: if you're mad about Mad Gab, you can aim to go for 40 or 50 point games. Or, if you want a milder game, reduce the points needed to win. Knock yourself out!

In the two-player game, there is no coaching (you wouldn't want to coach your opponent, now, would ya?). There's also no steal- ing (you'll be looking at the answer, so that would hardly be challenging).

Players simply try to figure out the three puzzles on their own as their opponent flips them up. Points are scored in the same way.

In the three-player game, determine how many turns you will all get. Player 1 draws the cards and handles the flipper as the Coach, Players 2 is the Guesser of the puzzles, and Player 3 is the Stealer.

Players rotate turns. Whoever has the highest number of points after every player has had the same number of predetermined turns, wins. 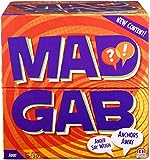