Love It! Hate It! Game Rules Be the first player to get three Love It! Chips and three Hate It! Chips by guessing what other players love and hate about the given scenarios.

The person who owns the game is the first one to be the Subject of a scenario and all other players' attention!

The Subject takes a Card and reads it aloud. Each Card states a scenario with blanks needing to be filled in about what you think the Subject (the player reading the Card) would love and what the Subject would hate.

For example: Lisa chooses a Card and reads it aloud, "If I were going to be on the cover of a magazine, I would love it if it were _____ and hate it

if it were ____". Now, Dan, Brian, Erin and Jen each fill both blanks with answers they think Lisa would like the best.

All players except the Subject secretly write their answers on the coordinating sides of their Speech Bubbles using their Dry-Erase Marker, guessing what the Subject would love and hate in the situation. The Subject waits quietly while everyone else fills in the blanks for them.

Once everyone has written answers on both sides of their Speech Bubbles, all players put them in the Bubble Tray. Be sure the Subject does not see what is written on the Speech Bubbles.

The Subject then decides which answer is their favorite.

Now the reader and the Subject repeat the process for the Hate It! side of the Speech Bubbles. The player who wrote the chosen answer gets a Hate It! Chip.

Return one Speech Bubble to each player, except the one who will be the next Subject. Erase the writing on both sides and get ready for another round!

Play moves to the left, with a new player selecting a Card and becoming the Subject.

Continue playing until one player has collected three Love It! Chips and three Hate It! Chips. If, along the way, a player wins a round and they already have three of those Chips, they do not get another Chip, but they have kept someone else from collecting more!

If you're the first to collect three Love It! Chips and three Hate It! Chips, you win! 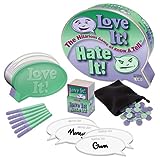 Love It! Hate It! 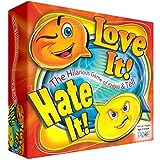 Love It - Hate It, Multi Color

Love It or Hate It - Party Game