Loonacy is a very simple, high-speed game of matching pictures.

Be the first to play all of your cards and you win!

Shuffle the deck and deal 7 cards to each player.

After all players have had a chance to look at their cards, establish the discard pile(s) by flipping over cards from the top of the deck. The number of discard piles will vary with the number of players, as shown here:

You can place a card from your hand onto any of the discard piles if one of the symbols on your card matches one of those on the card you are covering.

In this game, players don't take turns. Any time a player has a card that can be played, they may jump right in and do so.

If two players try to play on the same pile at the same time, the one whose card first reaches the pile wins that race. You can play any number of cards in a row as long as each is a match, but you must play each one in turn, using the same hand.

You can't just drop them down in a stack. If someone else is quick enough to jump in between your plays, you must let them.

when No One Is Able To Play

When all players agree that no further plays will occur, all players draw a new card. (Plays are not compulsory; you may wish, for strategic reasons, to hang onto a card because it groups with others in your hand).

Players should indicate that they are ready to draw by pointing at the draw pile.

When the draw pile runs out

If you come to a pause when everyone needs to draw but there aren't enough cards left for each player to get one, shuffle all the discard piles together into a new draw pile and re-start the discard piles as during setup.

(Or, if your group prefers, you can keep the topmost card from each discard pile in place, and just reshuffle the rest of the cards).

In Loonacy, it's always everyone's turn, so the first to play is whoever plays first!


If a player must leave

If someone finds they must drop out of the game, they can simply use their hand of cards to form a new discard pile and excuse themselves. Unless it is a 2-player game, the others can continue without interruption.

The first player who gets rid of all the cards in his/her hand is the winner. 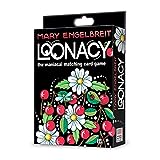