Long Shot is an exciting horse racing game in which players buy, bet, and manipulate horses throughout a race around the track.

The object of Long Shot is to have more money than any other player at the end of the race.

Place all horse pieces behind the start line and stack the betting chips and money near the side of the board. Place all Horse cards face up in a line next to the board.

Each player begins the game with $25 (three $5 bills, one $10 bill), three randomly dealt "Long Shot" cards, and one brown "Reroll" token. Place the rest of the "Long Shot" cards face down in the corner of the game board to be used as a draw pile. Discarded cards will be played there as well.

Each player rolls the horse die (10-sided die) to see who takes the first turn (highest roll goes first). After determining the first player, the other players will take turns in clockwise order.

A player begins his turn by taking advantage of all horse features that may apply on the horses HE OWNS.

If a horse rolled on the horse die during this part of the turn has finished the race, the die must be rerolled until a horse that hasn't finished is rolled.

Example: Michelle rolls a "7" on the horse die and a "3" on the move die. She then advances horse #7 three spaces on the track, regardless of whether she owns that horse or not.

In addition, the player whose turn it is may also move all horses he owns that have the horse number just rolled in each of his horse's "Movement bar", the number of spaces shown on the move die.

The "Movement bar" is located at the bottom of each of the horse cards. Players may advance horses they own in this way on their turn only.

Players may advance more than one horse they own in this way, provided each horse has the number just rolled in its movement bar.

Instead, the player who Just rolled the dice may steal a card at random from the owner of the horse Just rolled on the horse die if they have at least 1 card.

If the horse Just rolled on the horse die is unowned (owned by the bank), the player whose turn it is may draw a card from the draw pile. No horses advance when a "0" is rolled on the move die.

Horses containing the number in the Movement Bar Just rolled on the horse die, also do not get to advance as a result of the "0" being rolled.

If all of the cards in the draw pile have been drawn before the game ends, players skip the draw phase of their turn, and no more cards may be drawn.

A player may choose to pass on their turn, and choose no action.

At any time during the game, a player may trade in his "Reroll" token to reroll ONE of the two dice immediately after their initial turn roll.

A player must decide whether he will use his "Reroll" token before players use other cards that correspond to the roll.

If, however, the player trades in his Reroll token to reroll the "Horse" die, and then rolls a "4", a "Lucky Numba 4" card can be played. The "Lucky Numba 7" card could not be played.

The new die roll, together with the other unchanged die, become the new die outcome. Horse movement follows as usual. Once a player uses his "Reroll" token, it is removed from the game.

Players may NOT use a "Reroll" token in conjunction with a "Long Shot" card. Unused "Reroll" tokens are worth nothing at the end of the game.

Game play ends immediately after a third horse crosses the finish line. All players discard the cards left in their hand, and discard all bets unrelated to the 3 horses that have finished the race.

Horses that do not "win", "place", or "show" make no money, and are returned to the bank. No more cards may be played, and the current player's turn may be cut short.

Players may keep any money left in their hand (money that is NOT bet on a horse). Place the winning horses in the Winner's Circle as each one crosses the finish line.

There are 3 sets of odds for each horse located on the bottom left half of each of the horse cards.

If players have placed a bet on one of the horses that has crossed the finish line, they receive their bet amount multiplied by the odds of the horse in which the bet was placed.

First the bet is paid to the bank, and then the winnings are paid to each player for the each relevant bet. It's best to do this transaction one bet at a time to minimize confusion.

All bets placed on horses that do NOT cross the finish line (there will be 7) are given to the bank. No winnings are paid out on these bets.

Players then combine their winnings with the cash in their hand for a final game total. Owned horses are worth nothing. The player with the most money wins the game.


The race ends with : 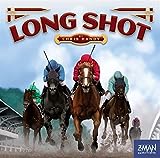