Shuffle the blue-backed card (including any expansion cards you want to use) together to create the deck, then deal 5 cards to each player.

Whoever spits the last is obviously the llama-iest,so they go first.

Players take turns by going clockwise around the table.

Each turn is made up of 4 phases.

There are 5 types of cards in the game.

There are 4 variations of each sub-type of Animal card:

Having 3 or more Animal cards of the same variation in your Field at the beginning of your turn will allow you to use that Herd Bonus! Herd Bonus effects are listed on the back of each Reference card. Card effects do not negate Herd Bonus effects (unless otherwise stated).

During your Action phase, you may do one of the following (unless otherwise stated):

OR DRAW a card.

Some effects are only triggered by certain conditions. Triggered effects are always preceded by an "if" or "when".

Cards use specific terminology when referring to players.

Order of Resolution: the Effect Chain

If any of these effects trigger the effect of another card, another link is added to the effect chain.

If multiple triggered effects require a target, the same card may not be selected twice in the same link. If there are not enough cards to target, you may only trigger as many effects as you have options for targets. You must select targets for mandatory effects before selecting targets for optional effects.

No player can win until an effect chain has been completely resolved.


Play vs. Bring directly into your Field

"Play" specifically refers to playing a card from your hand during your Action phase or playing an Instant card at any time.

Some cards specify that they can't be "affected" by certain things. Cards can be "affected" directly or indirectly. Direct effects target a card individually or as part of a group.

Indirect effects require a player to target a card or perform an action that affects a card. If a card states "this card cannot be affected", it is immune to both direct and indirect effects.

When you "pull" a card, it must be picked randomly. When you "choose" a card, you can look at your options and pick whichever card you want.

Some card effects allow you to search the deck or the discard pile for a card (ex. "When this card enters your field, you may search the deck for a Downgrade card and add it to your hand").

Once you have retrieved that card, you must reveal the card you chose to each other player before adding it to your hand.

The first person with the required number of Animals in their Field wins. Each Animal card counts for 1 Animal (unless otherwise stated).

If a player reaches the required number of Animals while an effect chain is active, that player is not declared the winner until all links in that effect chain have resolved.

If the deck runs out of cards before any player reaches the required number of Animals in their Field, the player with the most Animals wins.

If 2 or more players tie for the most Animals in their Field, each tied player must add up the number of letters in the names of all the Animal cards in their Field. 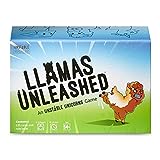