LINQ " is a word-based game that requires both bluffing and brainpower to outwit your opponents. You win by being the best at learning how other players think and guessing which two players have the LINQ.

The Dealer is responsible for drawing, and dealing the cards before each match.

Note to Dealer: Before the first game of UNO"' can be played, the cards must be separated into two decks: The LINCT deck (consisting of 240 word cards), and the Bluff deck (consisting of 10 cards with "???"s on them - located at the front of the deck).

The UNG" deck must remain in order, so that 2 cards are drawn in a single pair of the same word. It is imperative that this deck is NEVER shuffled, since two players must have a card with the same word on it for each round.

Should the deck become jumbled, it must be reset so the cards are paired up. (To make this easier, simply remove the first 10 cards from the card box. These should be your Bluff deck.

The remaining cards make up the UNG" deck and should be left in the box. The first two cards are now ready to be drawn. After each round of play, the dealer simply places the pair of LINQ" cards at the back of this deck, and the next pair is ready to go).

The object of the game is to figure out which two players have the LINQ by listening to the clue words that all players give.

By definition, players who have the LINQ each have a card with the same word on it - and there will only be two players with the LINQ per match.

To get started, the Dealer selects two cards from the LINQ deck and enough cards from the Bluff deck (cards with "???"s on them), so that each player can be dealt one card. For example, if there are 6 players - including the dealer - the dealer will draw 2 LINQ cards and 4 Bluff cards.

The selected cards are then shuffled by the Dealer and dealt face-down, one each to all players. All cards look identical on the back.

Once all cards are dealt, each player looks at their card without revealing it to the other players. Two players will have cards with identical words and will be the LINQ, the remaining players will have Bluff cards.

A match begins with the player to the left of the dealer saying a one-word clue to describe their card. The other players then follow, going in a clockwise rotation.

There are two rounds per match. In each round, all players say a one clue word to describe their card. Each clue word that is said is recorded by the Scribe on the Clue Board.

Players with the LINQ try to reveal to each other that they have the LINQ - while not being too obvious as to reveal their LINQ to the rest of the group. The remaining players try to bluff everyone so that no one knows who has the LINQ.

In this example, the two players with the LINQ are Melissa and Mia. The LINQ word is "Blue".

Erik leads off by bluffing with the word "rock".

Melissa alludes to her UNIT word with "ocean", though she is not completely obvious, as Mia demonstrates with "sky". Shane, playing off of "rock" and "ocean" offers "shell" as a bluff. After Round One, Melissa probably has a good indication that Mia has the UNO " with her.

After Erik plays "towel" to keep with the whole "ocean", "shell" theme, Melissa uses "blue" in a different context, and attempts to hook Mia in with "sad". Shane is still stuck on the "beach" idea, and Mia locks it up with "cold".

All guesses are secret and no player knows the round in which any other player makes a guess. Guessing begins after all players have given a clue word for Round One.

Once all the players have written something for Round One (either their guess or "No Guess"), they must place their guess sheet face-down in front of them and Round Two begins.

Note: Players must not mention their guess (or lack thereof) at this time as it might affect the way Round Two plays out. Guesses are only revealed after two rounds of play.

Note: If a player has already guessed in Round One, yet realizes in Round Two that he did so incorrectly, he may NOT guess again after Round Two, but must instead write "No Guess" on the Round Two Guess Sheet. Players may guess only ONCE per match.

All players score points by correctly guessing which two players have the LINQ. Each player may only guess the LINQ once per match. The following points are awarded at the end of a match for each player who correctly auesses the LINQ. (Players fill in one circle on the Score Board for each point earned per match).

Note: Both players who have the LINQ " must correctly guess each other, or neither player can score.

Note To Dealer: At the conclusion of each round, collect all LINQ" and Bluff cards. Place LINQ" card pair at the back of the LINQ" deck box so that the next two cards in front are ready for the next round of play.

Erik (who had a Bluff card) scored one point because he failed to guess correctly. Melissa (who had the UNIT) scored 3 points because she guessed correctly in Round One.

Players may only give a one-word clue per round.

A player who has the LINQ cannot say the LINQ word, any form of that word, or any word that rhymes with the LINQ word. If this occurs, the match is terminated and a new match begins...

•.However, if a player who does NOT have the LINQ says the LINQ word, it is okay to continue playing as only the two players with the LINQ word will realize this at this time. (It does make it fairly easy to recognize that this person does not have the LINQ once all is said and done).

At no time may any player see the card of another player. All players must guess the LINQ once per match.

The first player to score 10 points (or the most points above 10 in the event of a tie) is the winner. If players tie with 10 points, additional matches are played with all players still eligible to win until the tie is broken.

This is done by saying a clue word that is completely different than the LINQ word and then, in Round Two, saying a clue that is much more obvious... But, watch out!, If your LINQ partner actually guesses in Round One and doesn't pick you, neither of you scores!


Bluffing: Keep it General - Remember, specific words have narrow definitions and fewer multiple meanings. The more general the clue word, the more likely it may be that a player will think you are the LINQ... even if you are not!


"Great Body Language" - Easy to say but much harder to pull off. Nevertheless, it is a great body language that often wins the day. One trick is to pretend you are the LINQ by taking an obvious second look at your card.

A player would only look twice at their card if they were looking at the LINQ word and trying to remember it... right?


Party Pack: In the event, you wish to play LINQ with more than 8 players, simply record the remaining scores on a separate piece of paper. WARNING: Things can get pretty confusing once you exceed 8 players though, so be careful!! 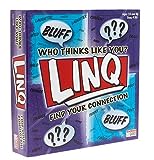 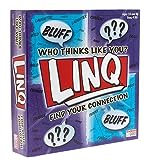