You and your teammate each write a list for the same category, hoping to make matches which advance your movers to "Brain Central" in the middle of the path.

Divide into teams of two players per team. (If there's an odd number of players teams can alternate having the extra player). Players should sit directly across from their teammate.

Each team takes the two movers that match the path in front of them, placing one on each end of their color path. They are trying to be the first team to get BOTH movers to meet at the brain space in the middle of their path.

Place the category cards off to the side of the game board and place the brain in reach of all players (but not on the game board).

One side of the table (1 player from each team) will get the dice cup first. The other side will get the folders (if only 2 teams are playing, all players get folders). All players need a sheet of paper and something to write with.

The side with the dice cup shakes the dice-but don't spill them out! They should secretly look at the number die that's in the cup.

That's the number of matches they need to make with their teammate. They should, though, announce the letter that's on the other die.

Someone then reads out the corresponding category on the top card. At the same time, all players start writing down answers to the category.

As soon as any player from the dice side of the table thinks they have the required number of matches with their partner they grab the brain, thus ending the round.

Only a player from the side that has the dice can grab the brain.

All players must immediately stop writing.

The number of matches needed is now revealed to all players and the player who grabbed the brain reads out loud what he/she has written. The teammate responds whether they do/do not have each answer.

If the required number of matches is made:

The player who grabbed the brain moves his/her mover forward the number of spaces as answers were matched. If they only needed two matches, but actually got three-he/she would start by moving ahead three spaces. He/She then move an additional three spaces as a bonus. The bonus is always three spaces.

The other teams still check to see if they have any matches between them and move ahead one space for each match made. Only the movers on the dice side of the board move.

If the required number of matches are NOT made:

The player/team with the brain do not get any points even if they made some matches. That's the risk in grabbing the brain.

The other teams move ahead one space for each match made as above.

The OTHER side of the table now gets the dice and will know how many matches are needed. They will also be the only players who can grab the brain when they think they have the number of matches needed.

Return the brain to the center of the table and give the folders to the non-dice side. Put the category card on the bottom of the deck and start a new round.

Movers do not have to reach the center space by exact count.

When a player's mover gets there, it stays there until the end of the game.

Once one of the team's movers reach the middle space, the other mover is moved on each future turn, regardless of which side of the table a teammate is on. 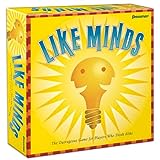